Check out our new item! Custom Wands! Customized Wood, Core, and Design! We Are Ready To Make Your dream Pottermore Wand Come True!

The Monster Slayer Sword. The making. 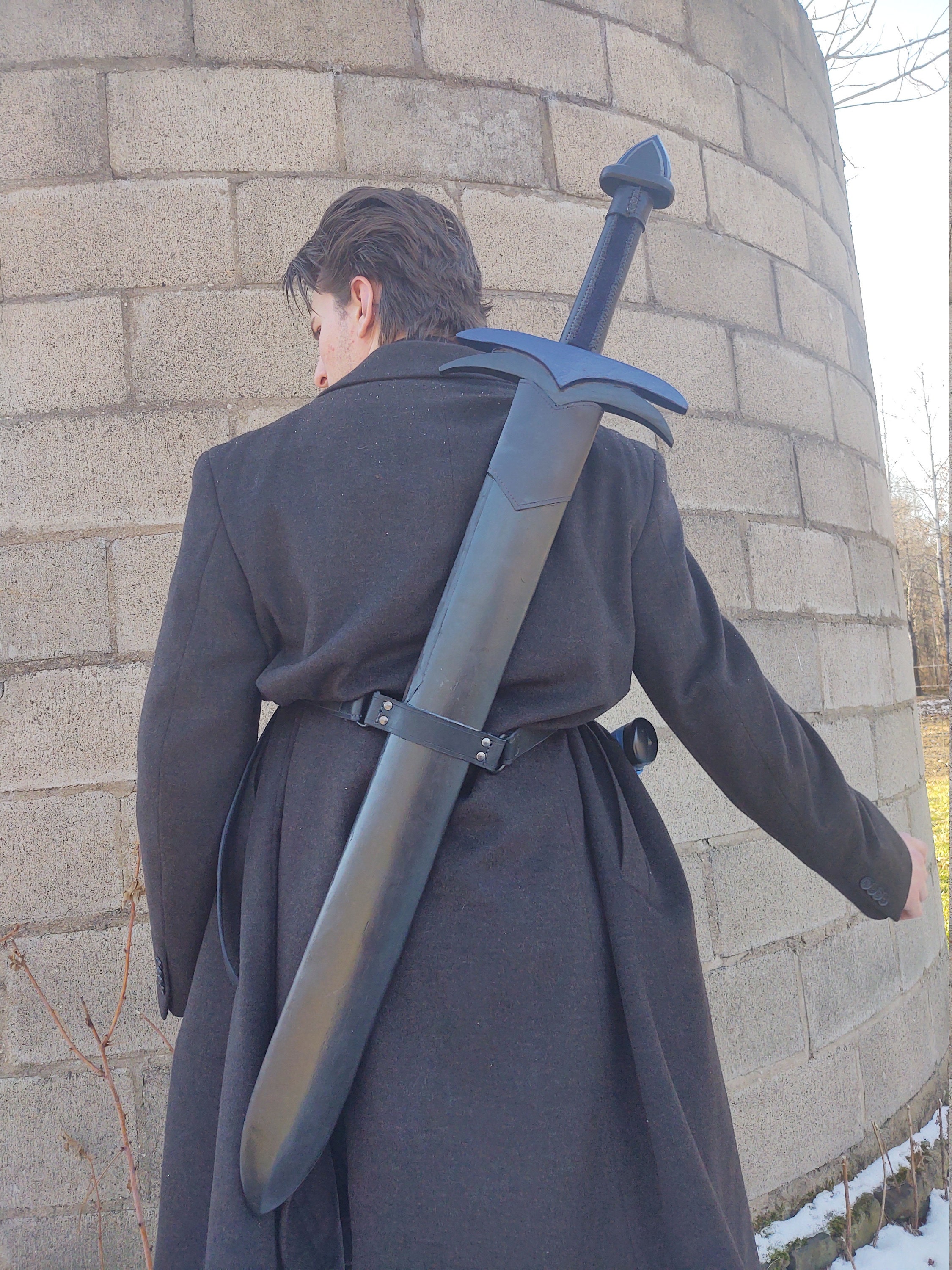 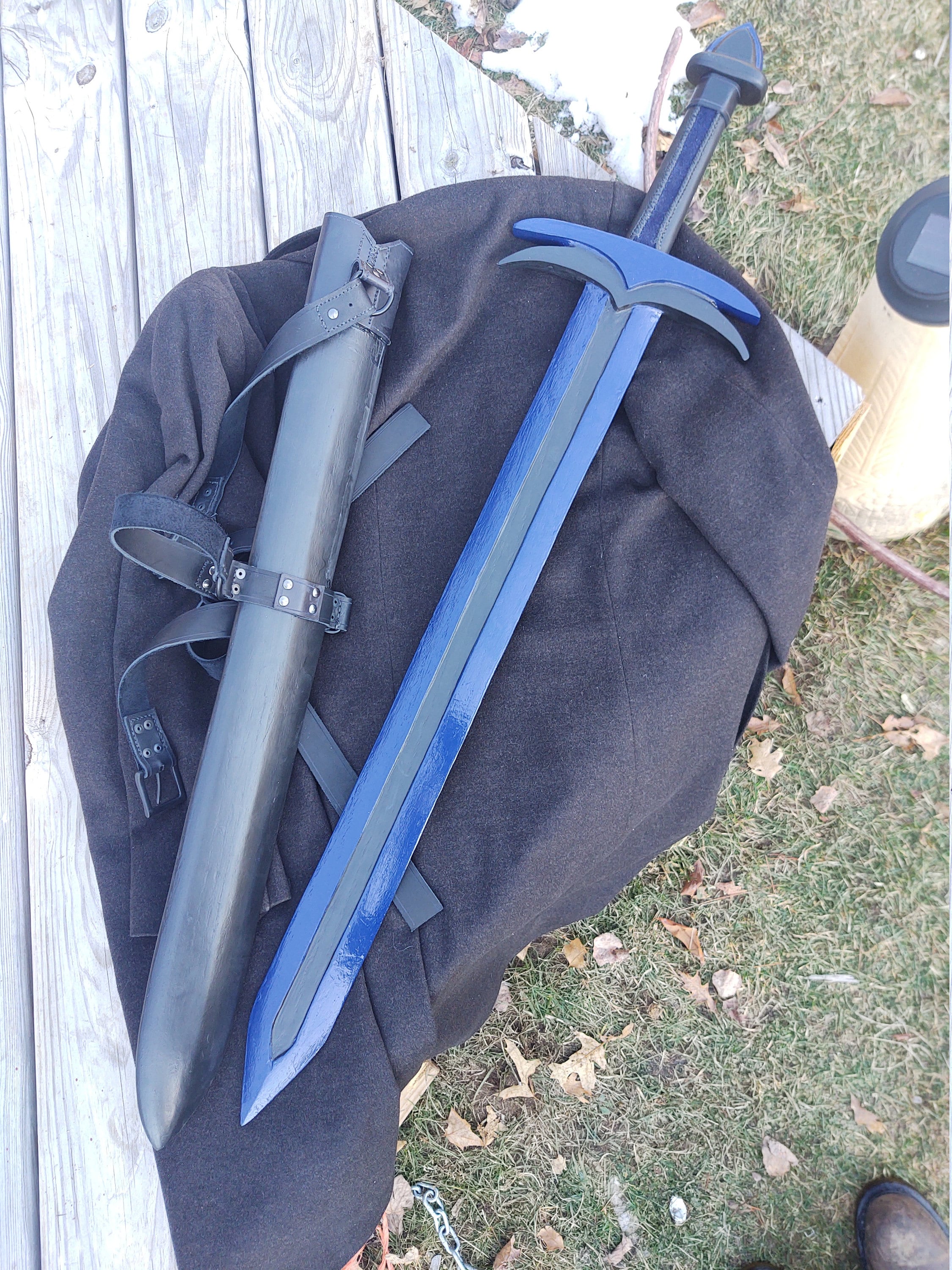 The monster slayer sword was one of the more challenging weapons I have ever made. This was a custom order, and while I do not typically paint my items, the customer wanted to go with a black and blue finish. But even the giangantic size of the weapon was not the greatest challenge, nor the bueatiful 3 point harness system I put together for it. Custom orders almost always bring me a new challenge to explore. Adding skills and elements to my repitoire that I'd never thought myself capable of until the pressure was on. 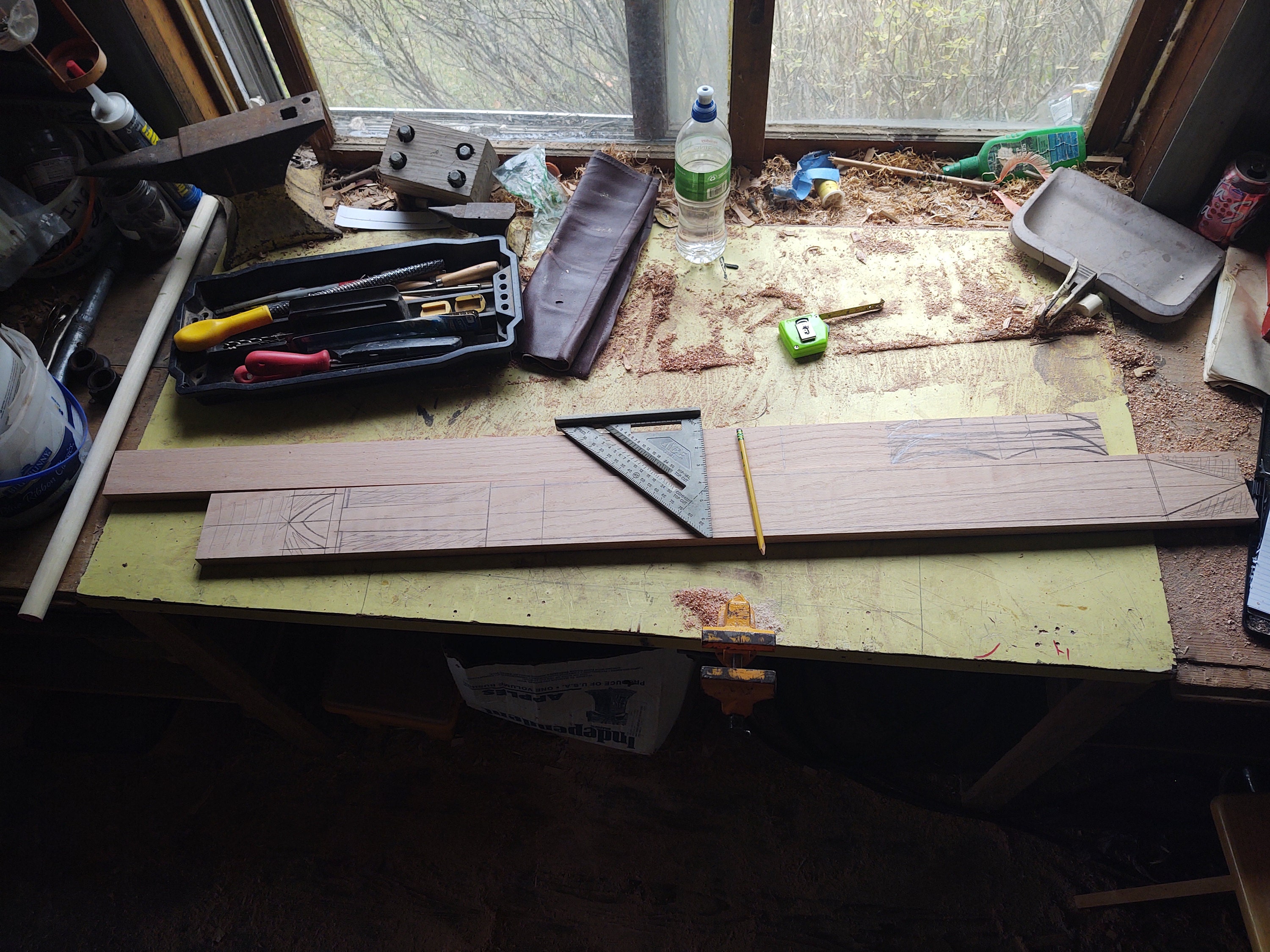 The challenge here was to figure out how to make a 35" by 3" inch blade drawable over the shoulder. The back draw is such a classic holywood style, and as impressive as it is impractical. but in the world of cosplay, awesome impractical is what we do!

The first step, was to make the sword it'self. The entire project, from blade to scabbard to accents, was made from kiln dried Red Oak lumbar. 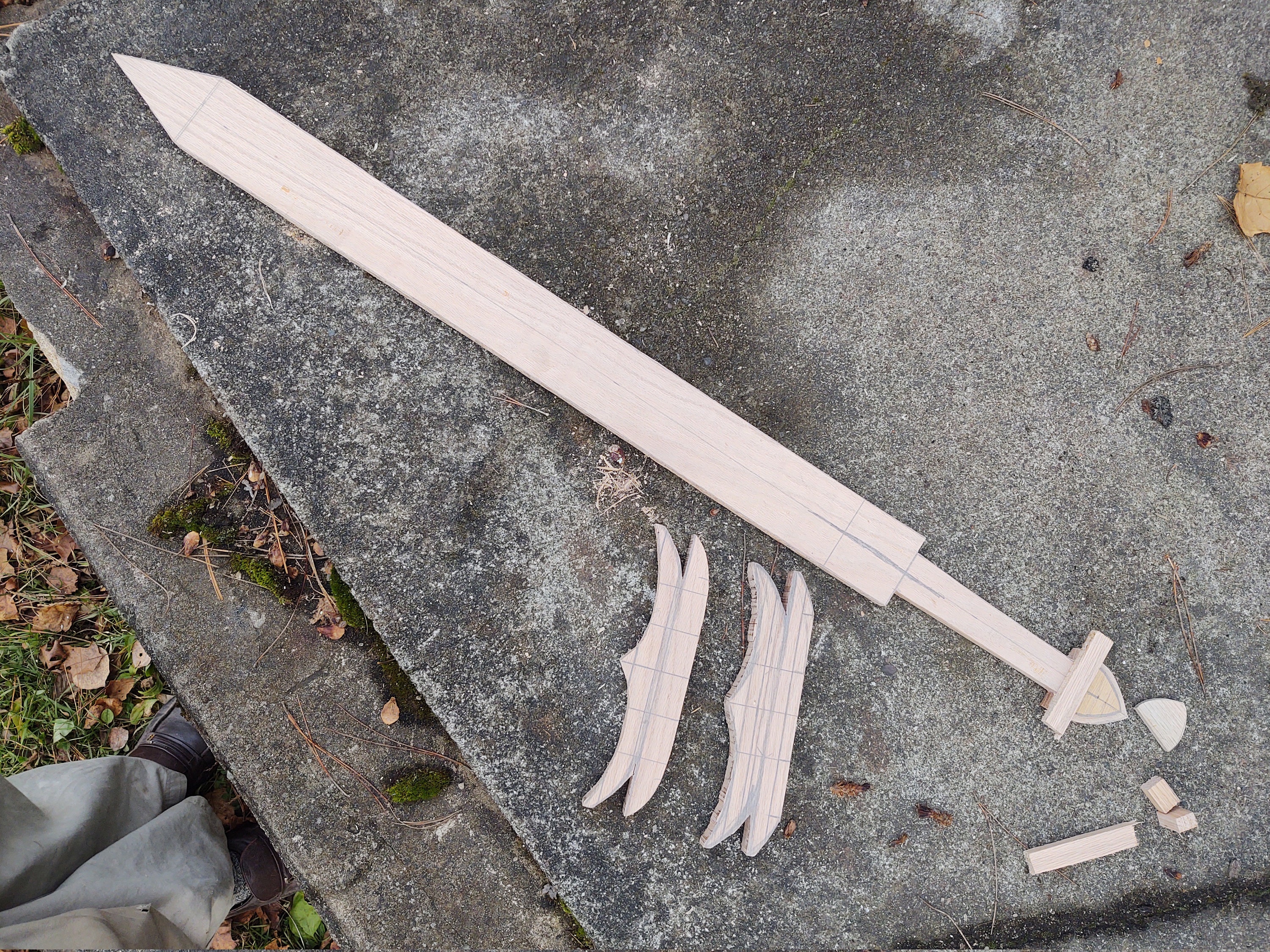 once the item is laid out, I cut it out with the bandsaw, and glue it all together with Tightbond II or Wood Epoxy depending on the purpose of the weapon. This one, a decorative piece, was glued with Tightbond II. 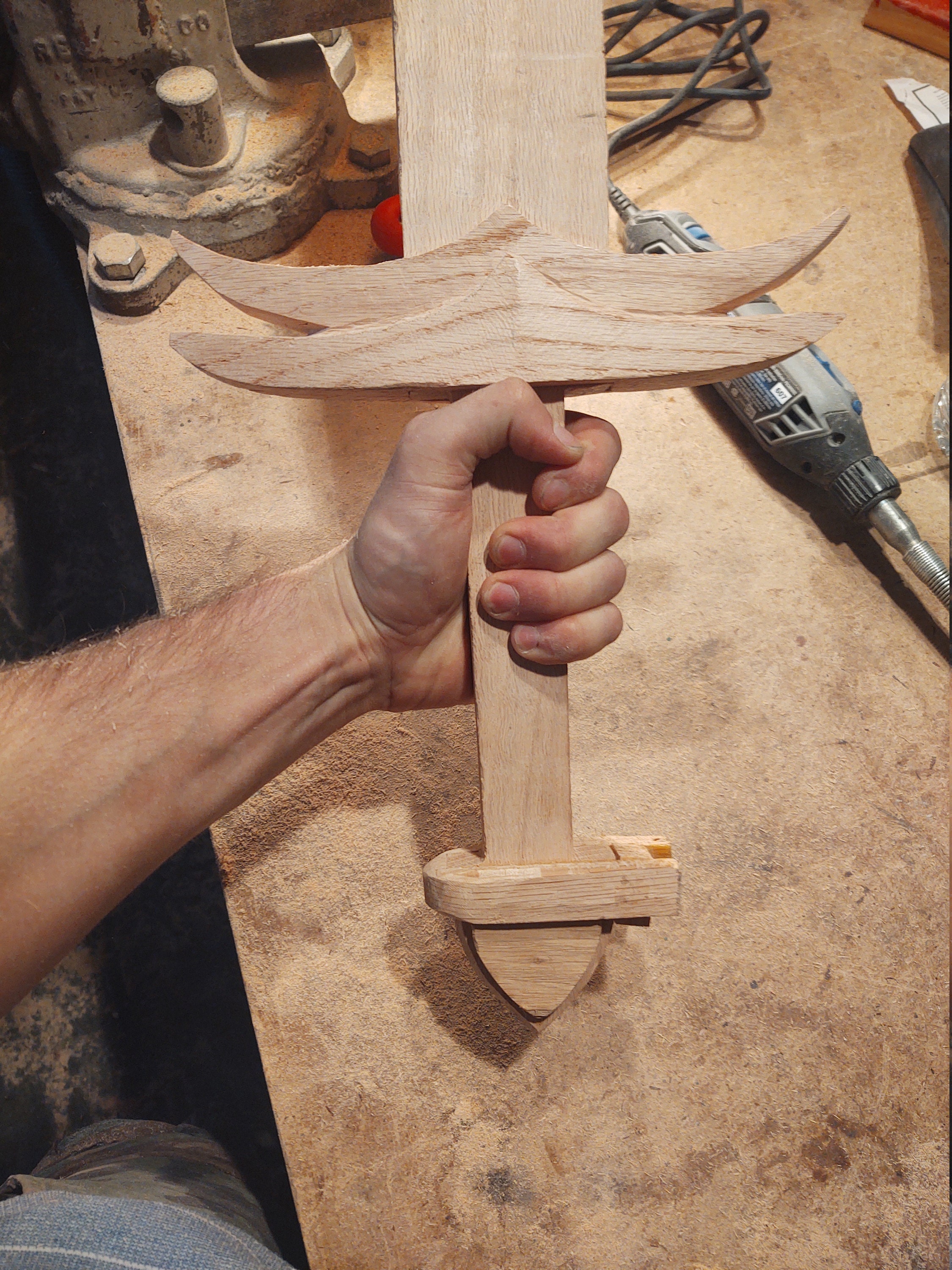 Once the rough cut shape was glued up, I start carefully removing material like a jeweler cutting fascets. My goal is to always make it as realistic as possible. 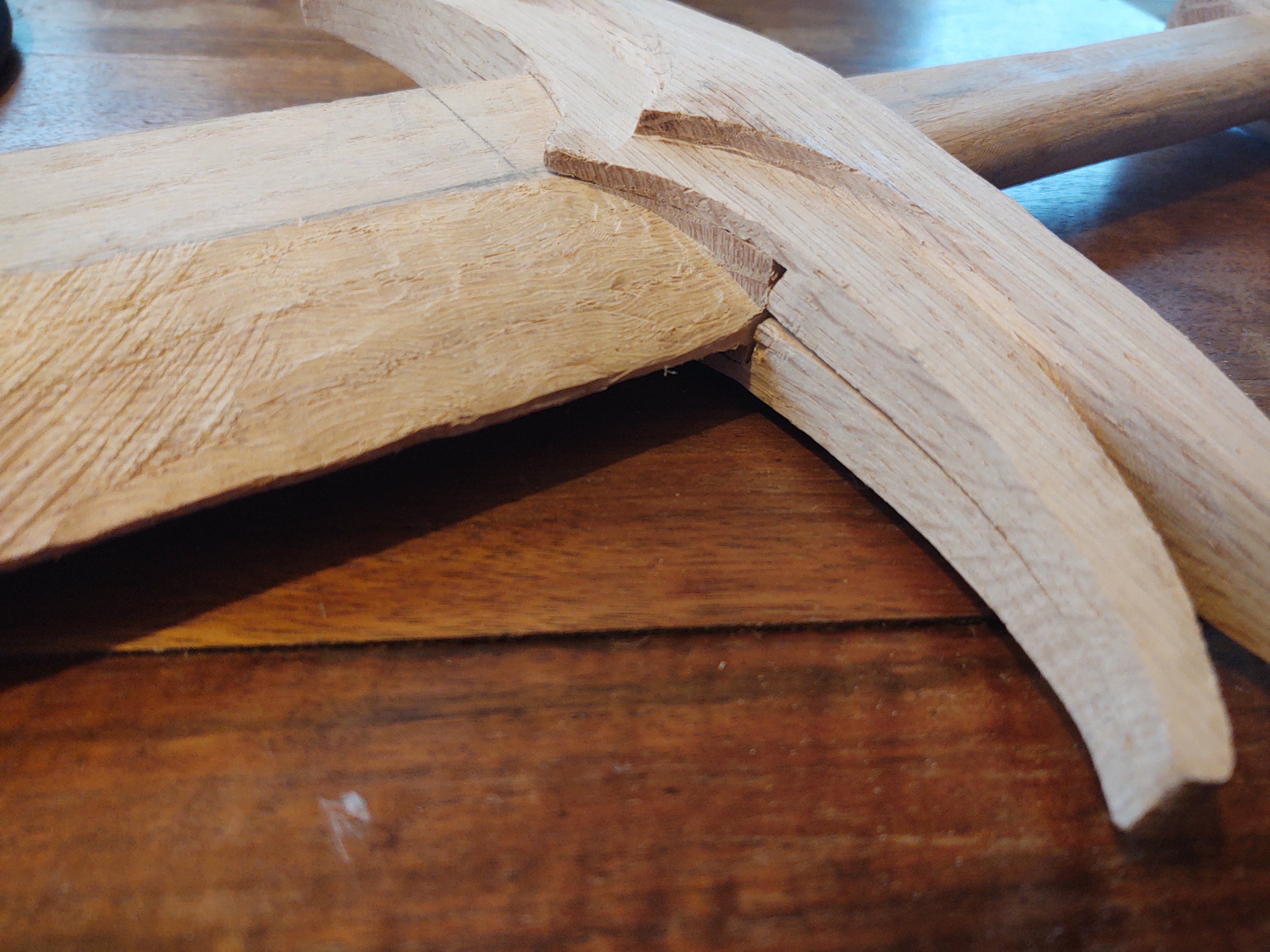 Much of the tight detailing on the guard was done with a Dremel tool. A trully wonderful device. And the gaurd came out very symetrical. 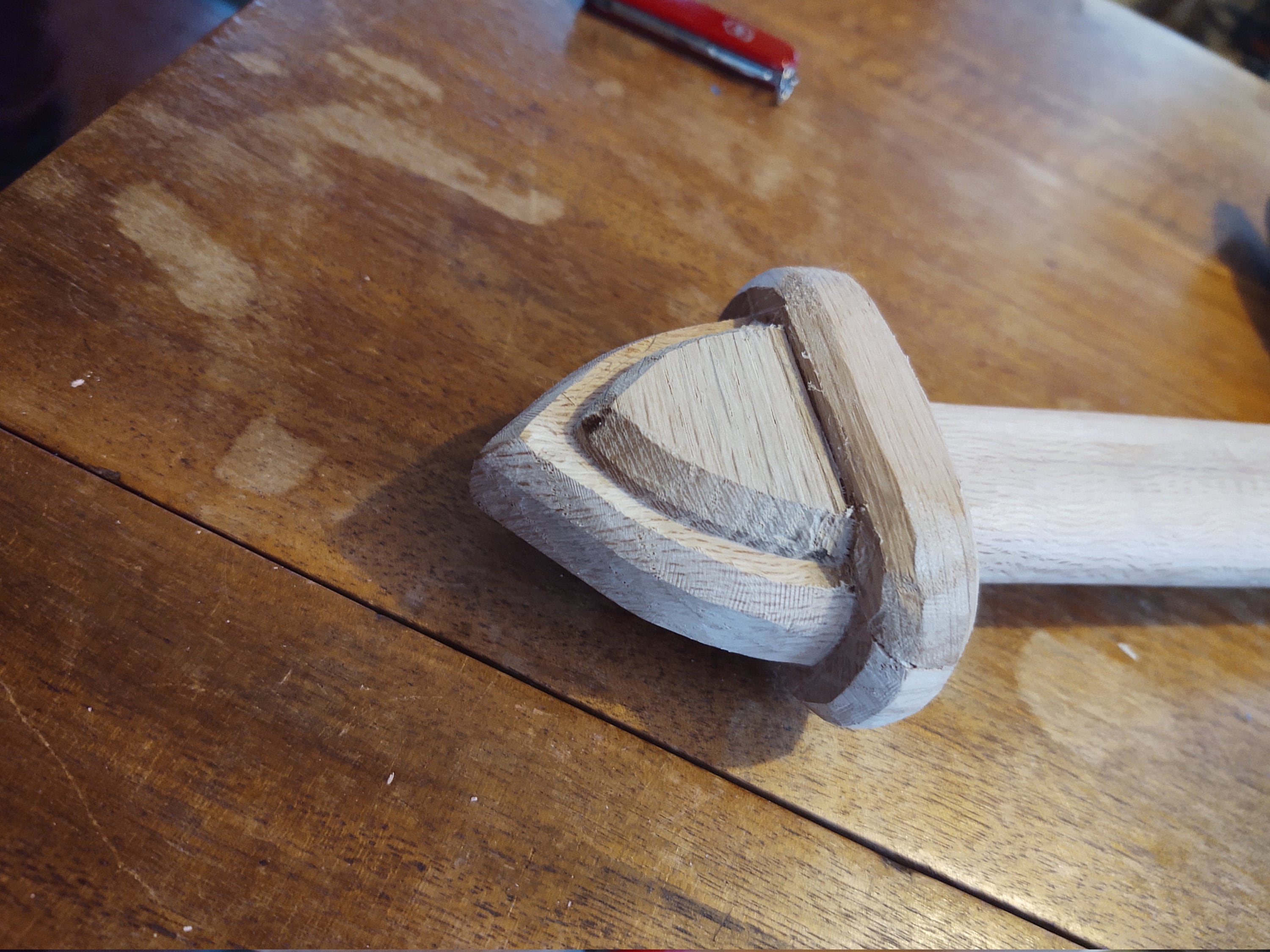 The pommel was also crafted mostly with The rotorary tool, allowing for those sharp fascets which bring it to life. 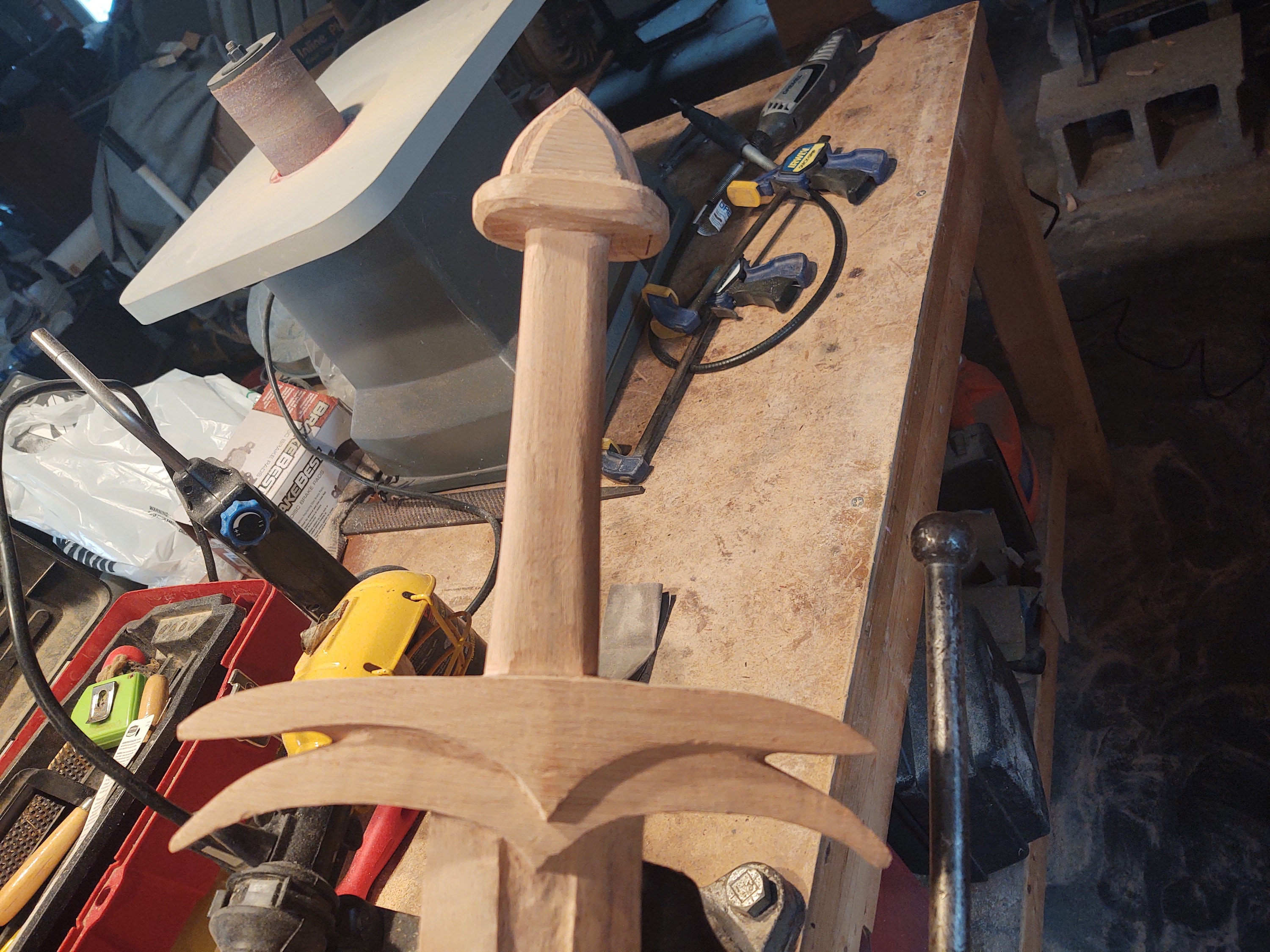 Fully sanding the entire piece to a dead smooth finish took several hours, and a full set of sanding paper from 100 grit to 600 grit. 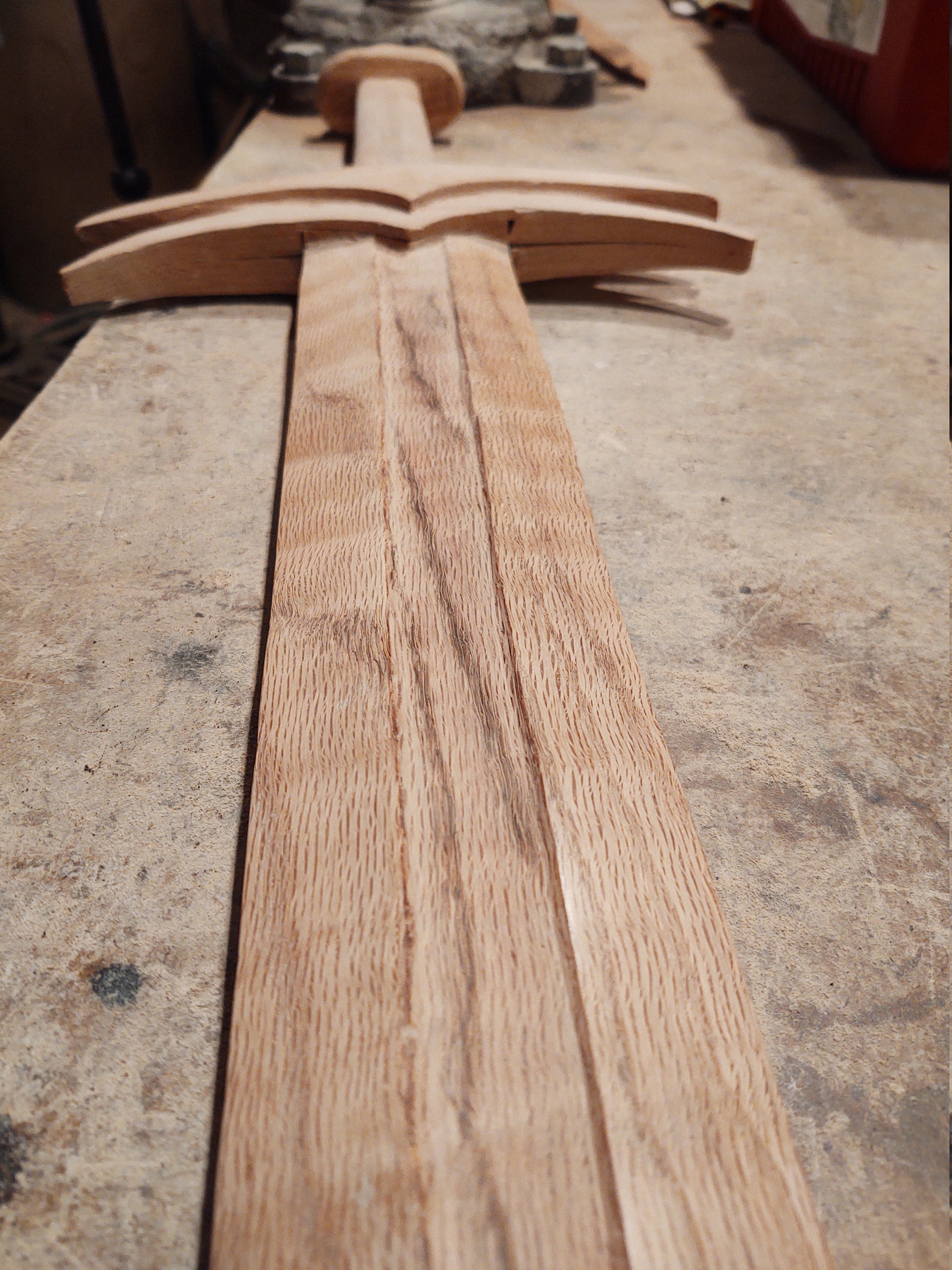 The beautiful rolling action in the blade is caused by a grain growth pattern called curl. This often appears in butt cuts. The lumbar cuts which often come from the low trunk of the tree. 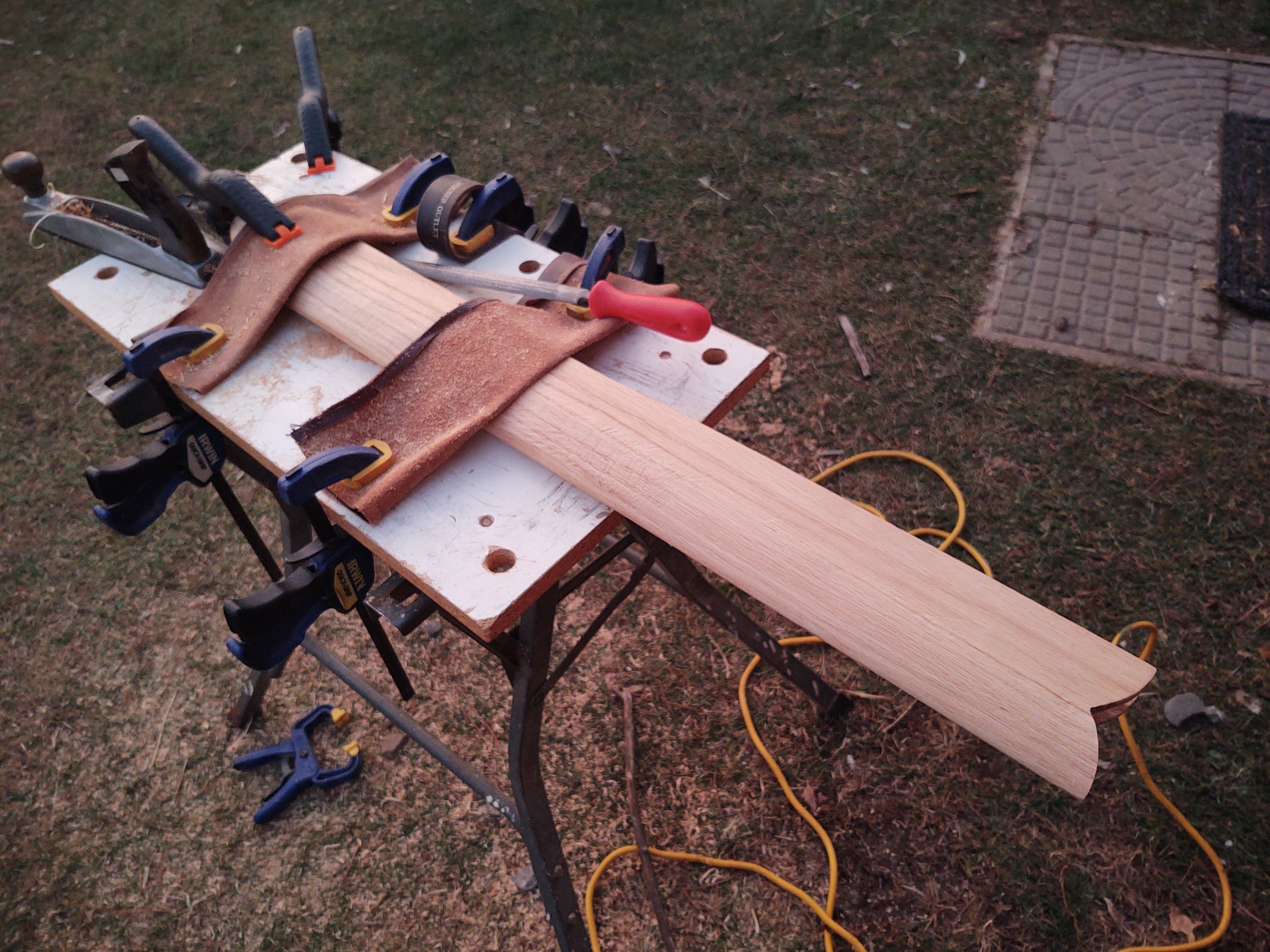 Now for the Scabbard. The reall center piece. This was also crafted from solid red oak. Using two 4 inch wide boards, I carefully chiseled out the inside to the proper depth ( about 1/2" total, to fit the blade. The really difficult part was in figuring out how to shape the outside of the scabbard once it was together. I could not clap it down in a traditional sense, since this would shatter the scabbard allong the long edges. So i had to rig up strips of leather with a planning bench. It was a long, stressful process, but it worked! 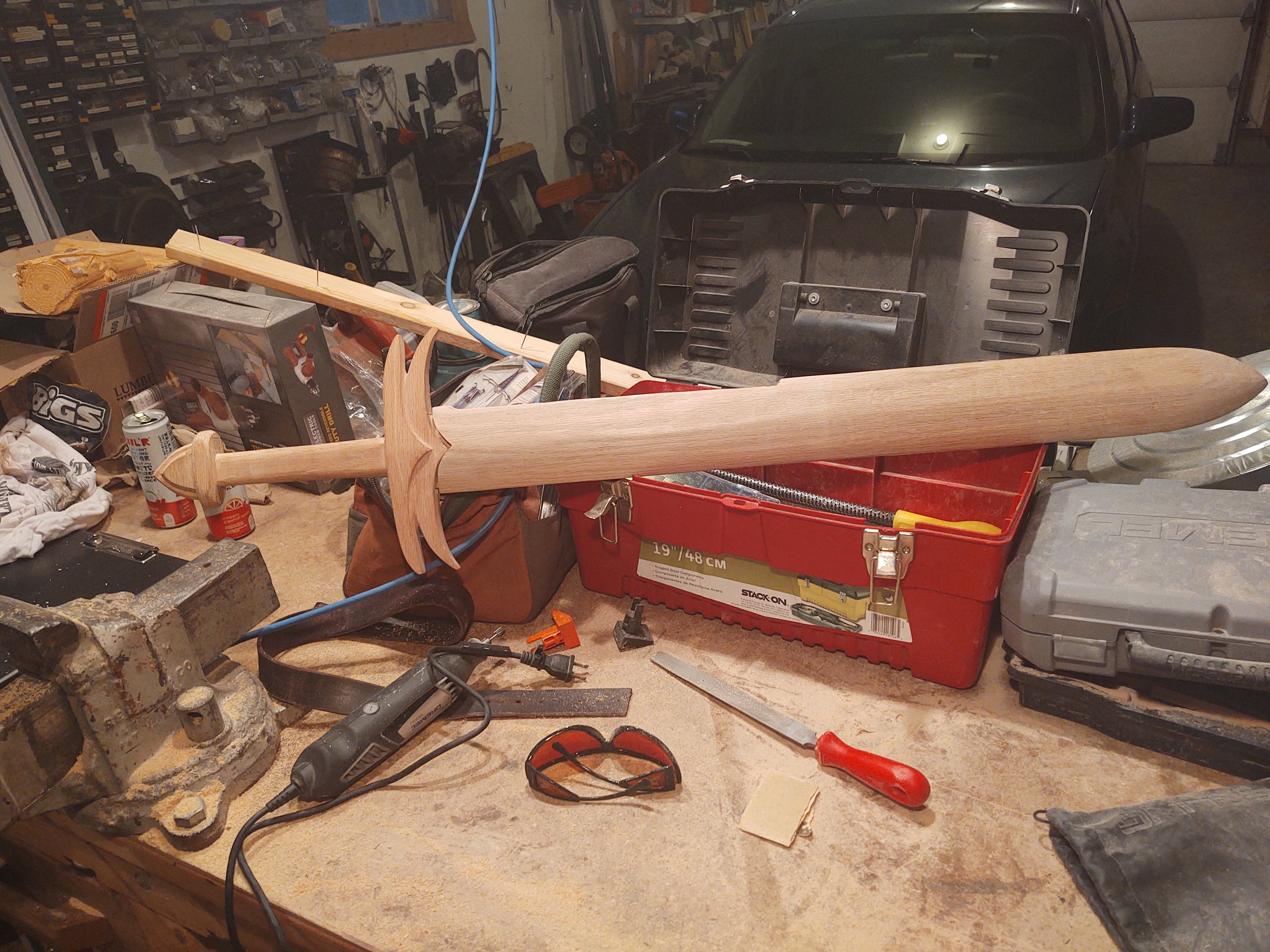 This was my first ever wooden scabbard. It has to be made out of wood in order to allow for the slot cut about half way down one side. The oak is strong enough to support the weapon, itself, and withstand regular stresses, while allowing the blade to be drawing from behind. The problem with solid scabbards on longswords is that you cannot draw a longsword from behind your back. Unless your the Slenderman, your arms simply are not long enough to clear the scabbard. The slotted scabbard cuts down the draw by half, allowing you to fully draw the weapon as it clears the scabbard through the slot. I actually got the idea for this design from Thorin Oakenshield's Sword, Orcrist. 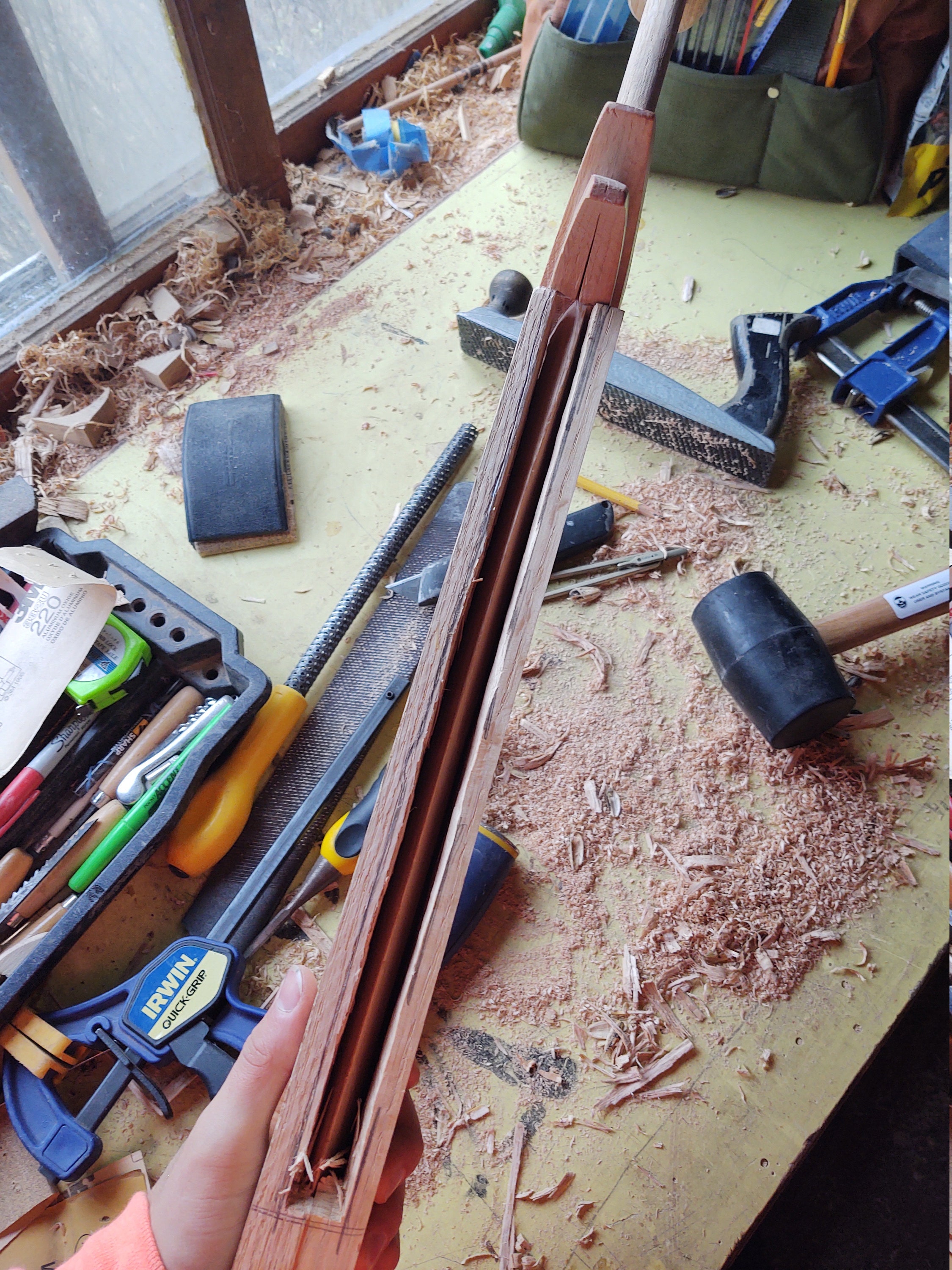 The slot, up close. 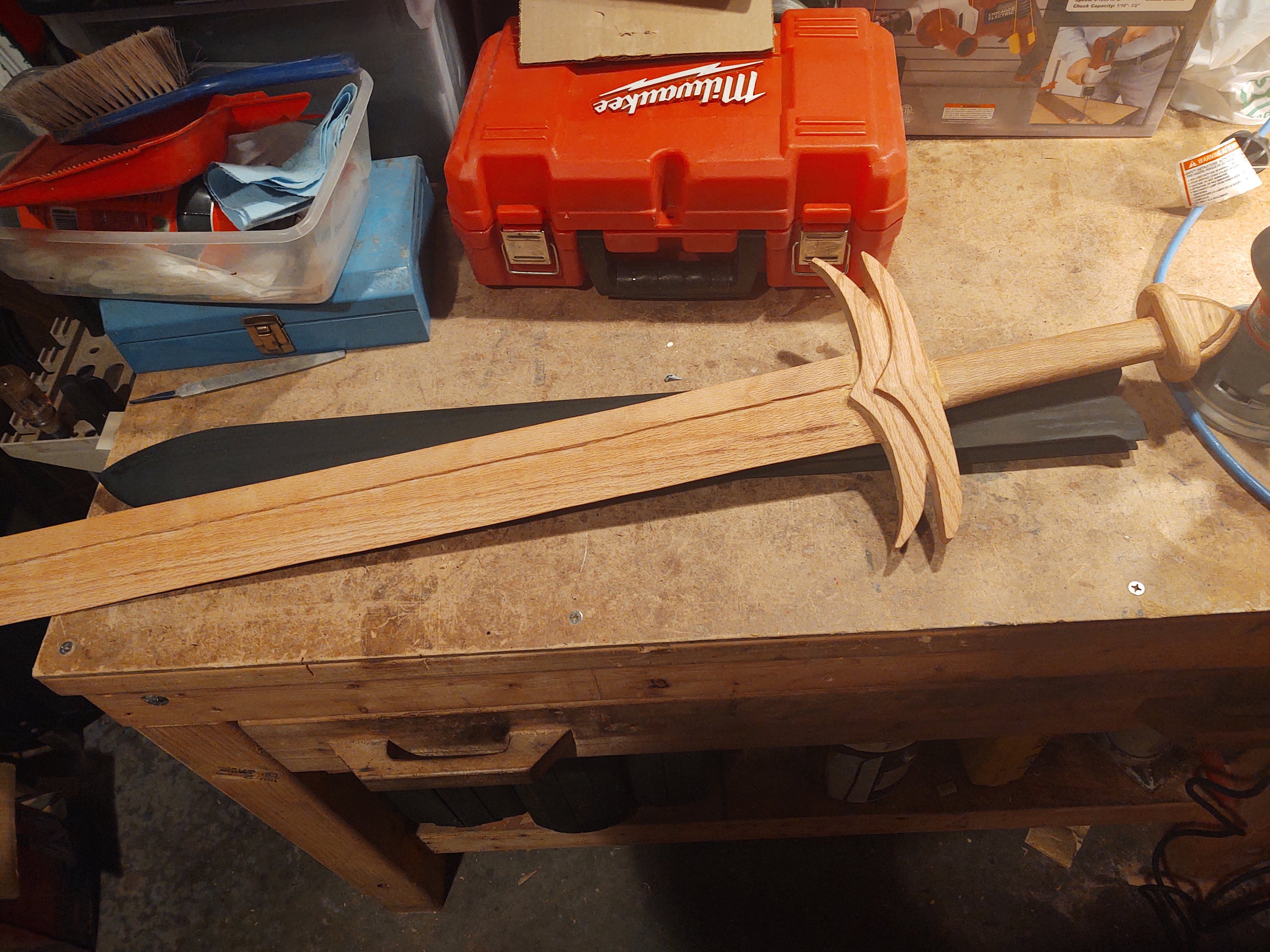 Finally, with both items sanded down and the scabbard done, I was over the hill. Now it was just time to paint, and order the materials I needed for the 3 point harness. 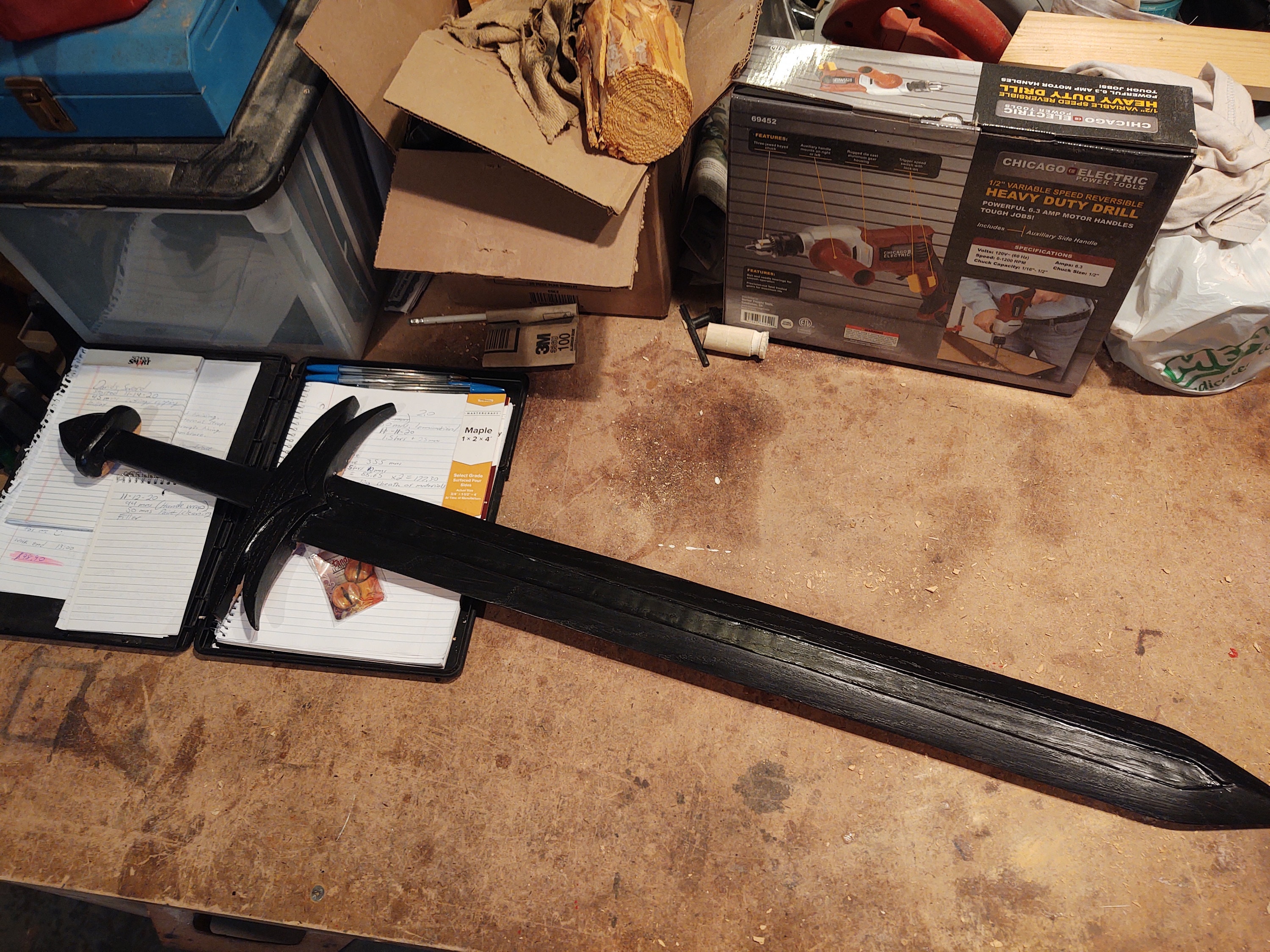 The colors for this weapon were black and blue. I decided to go with a flat black, and a glossy blue to help the blue pop. It was a dark, navy blue, and needed the glossy reflective surface to make it glow. I started off with a solid black base cote. 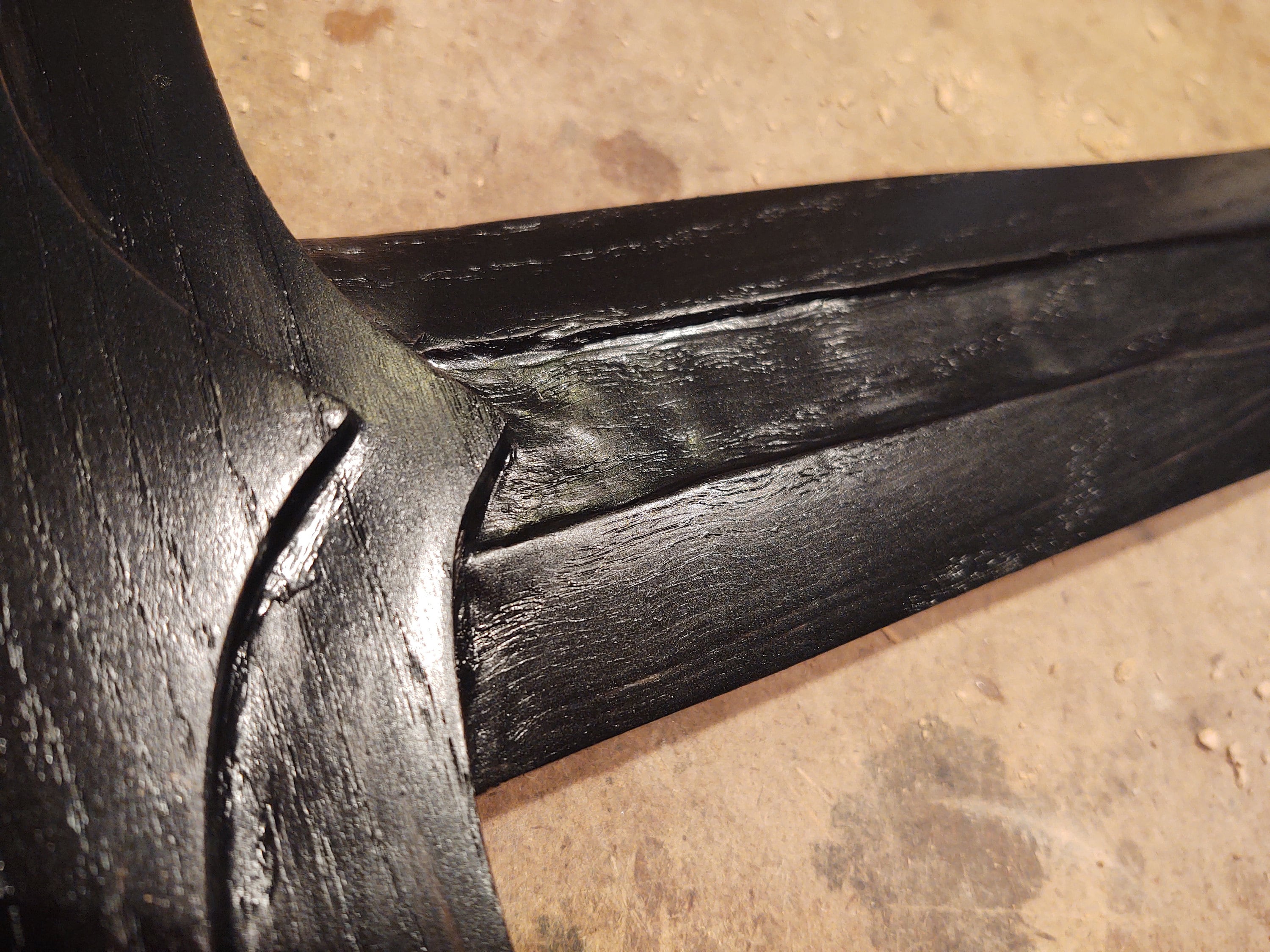 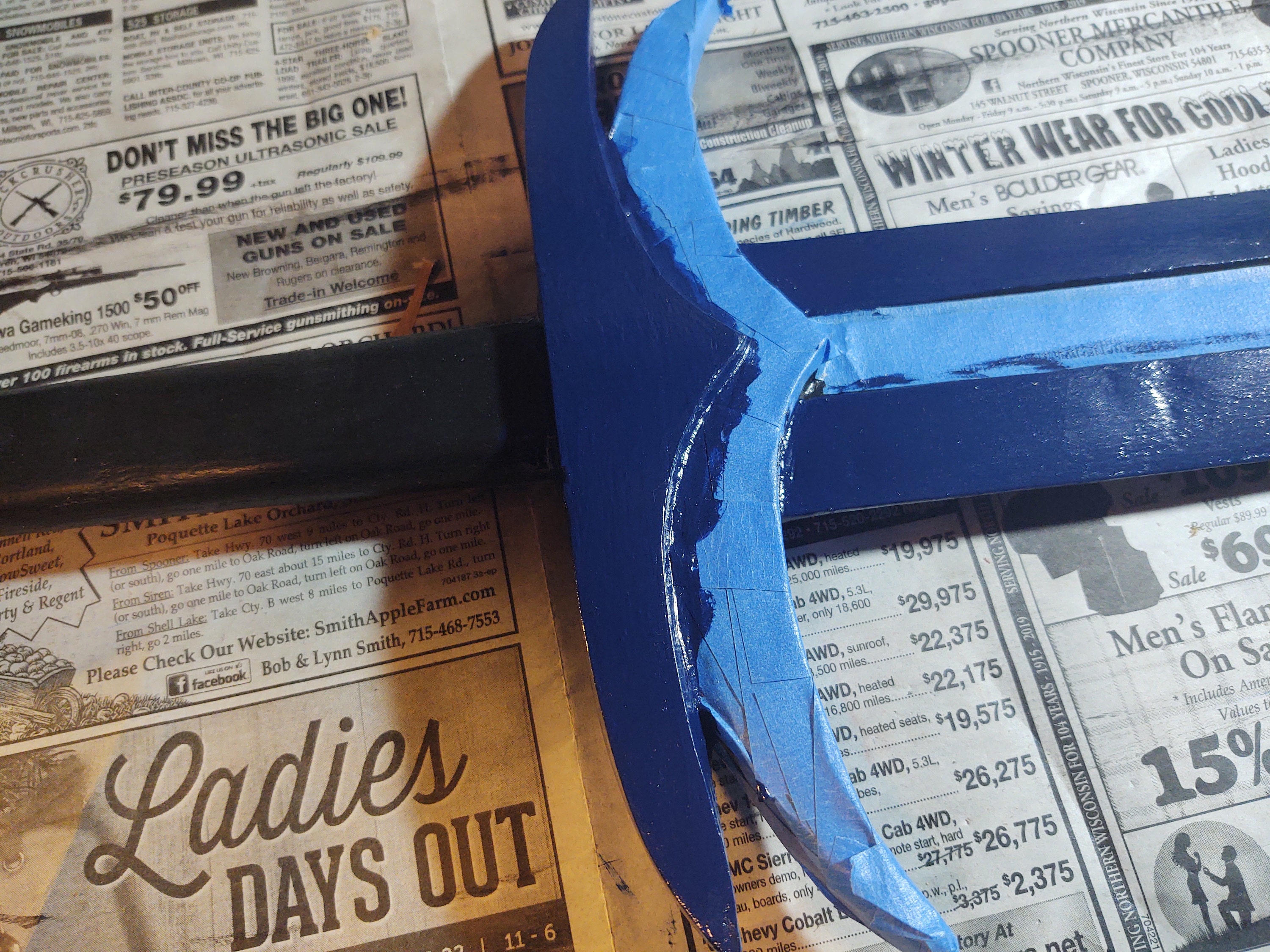 With the base cote in place, I carefully covered the requisite black areas in painter's tape to protect them, and started adding the blue. 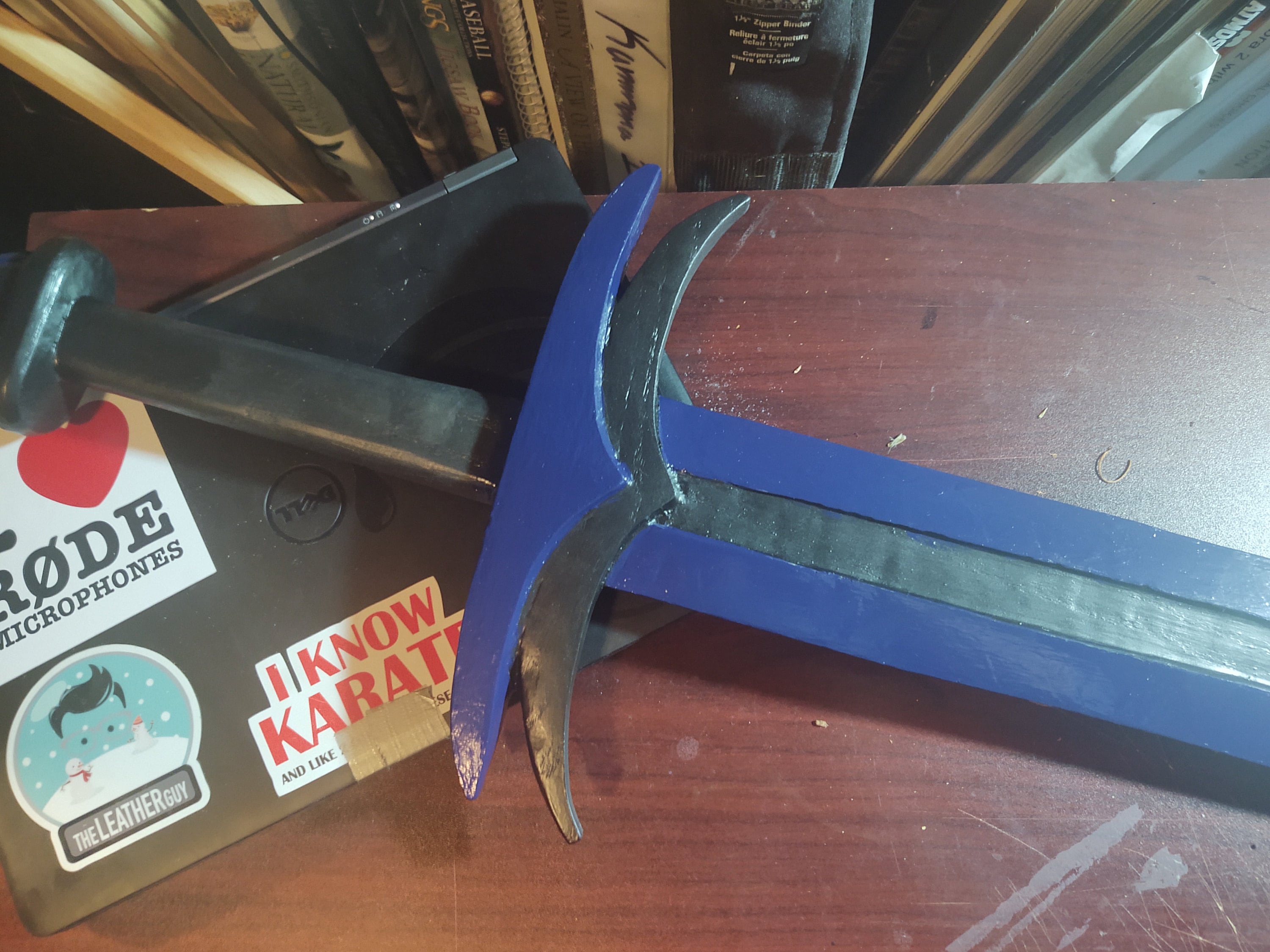 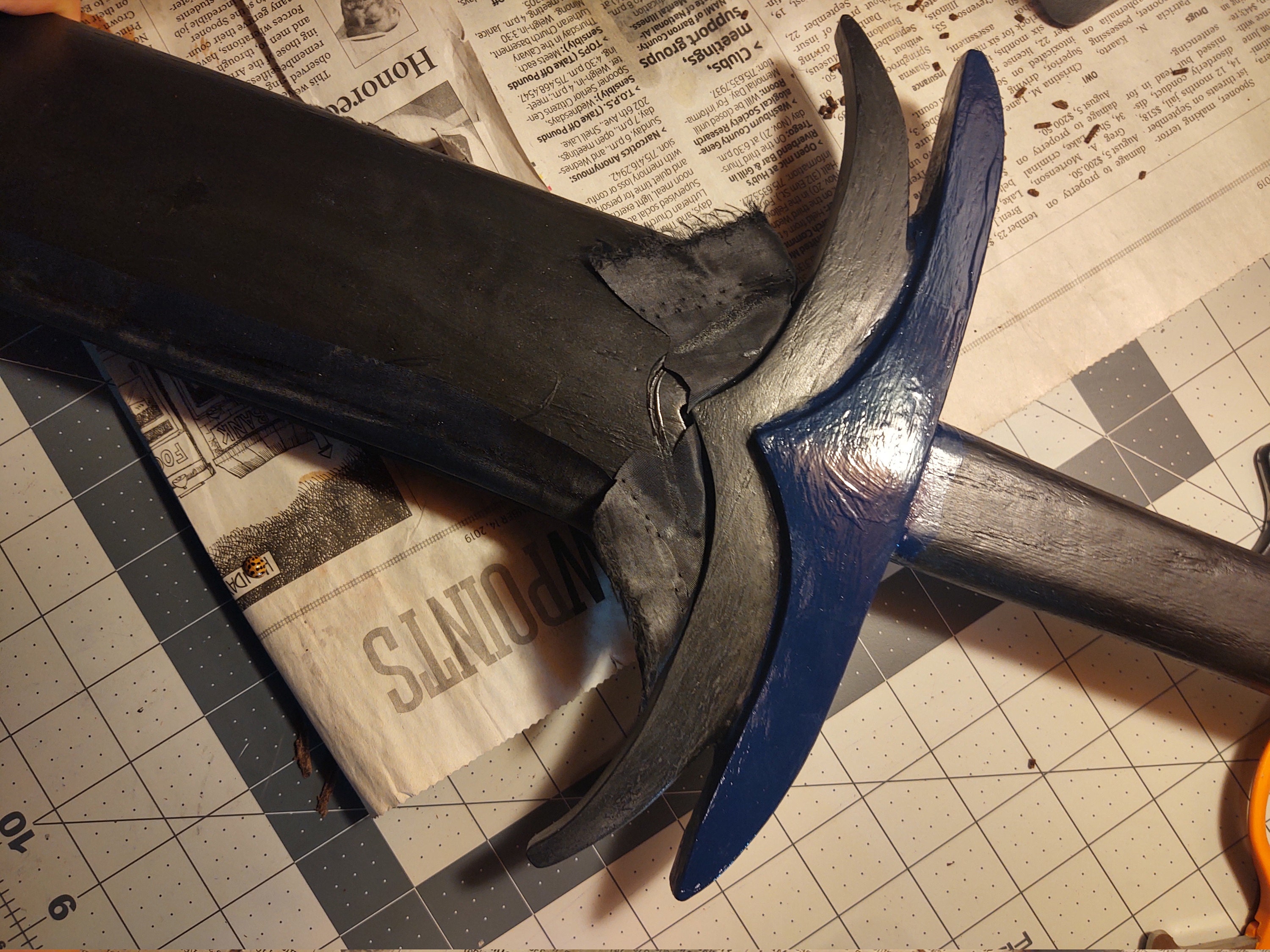 One of the other really tricky parts of the process with this scabbard was adding the satin lining. Because the inside of the scabbard was bare wood, it threatened to scrape the paint off. Even though it was tough outdoor paint, I knew the constant rubbing would soon wear on it. Next time I make one of these, the lining will definitely go in before I glue it together. Convincing it to go in there, and gluing it in place with the scabbard already together, was a stressful challenge. 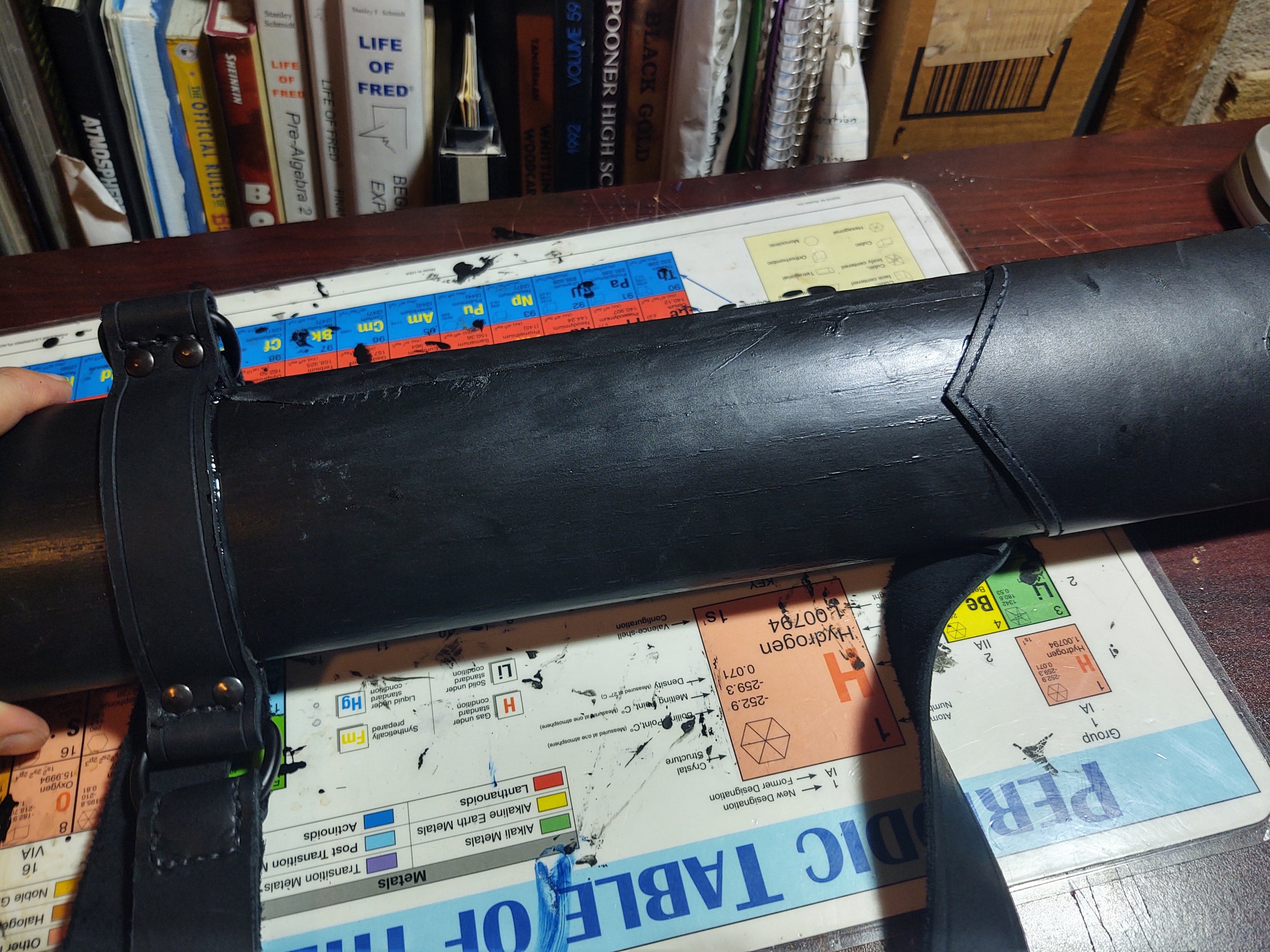 Finally, adding the harness and hardware! I used all black hardware and leather for this guy. And made sure to both rivet, and stitch almost every loop and join. Probably the mst heavy duty scabbard I've ever made. Because the slot had to stay open, I used epoxy to bond the leather to scabbard. The epoxy I use for this is a two part bowyering epoxing, and the toughest bonding agent I know of. 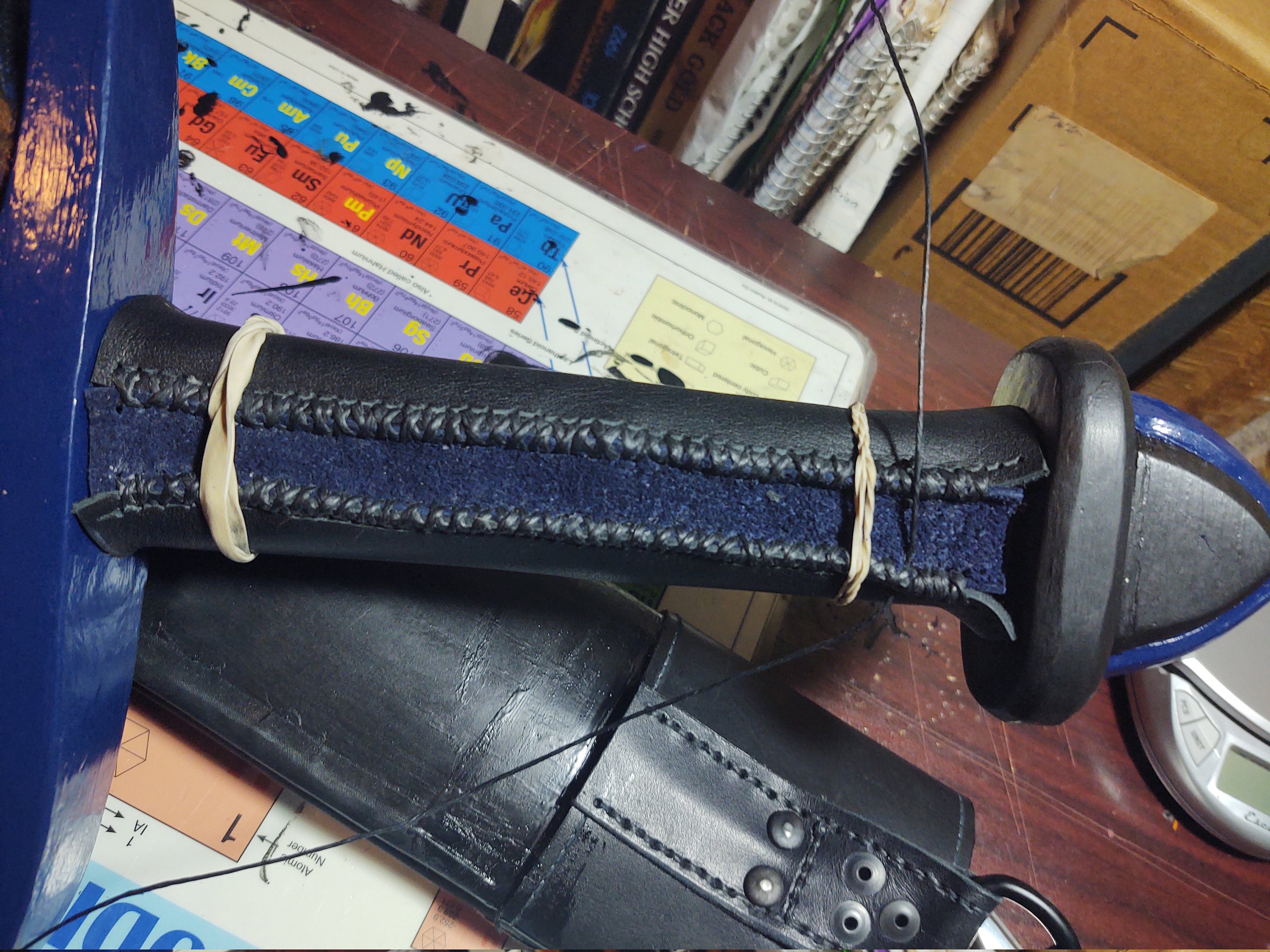 The beautiful blue suede and black smooth finish leather handle wrap. I had to custom bend a pair of needles to sew this on properly. The rubber bands assisted with keeping everything in place as I stitched, and were removed later on. Finally, with everything expoxied, painted, sealed, riveted and sewn, the labor was over. The challenges were overcome, and the last step in the process was to be had. I whipped together a quick costume, going for a very Van Helsing Monster Killer look on a whim. And it really turned out cool! Costume photo credit to my little sister, Sophie. Costume created and assembled by Daniel Hubatch. 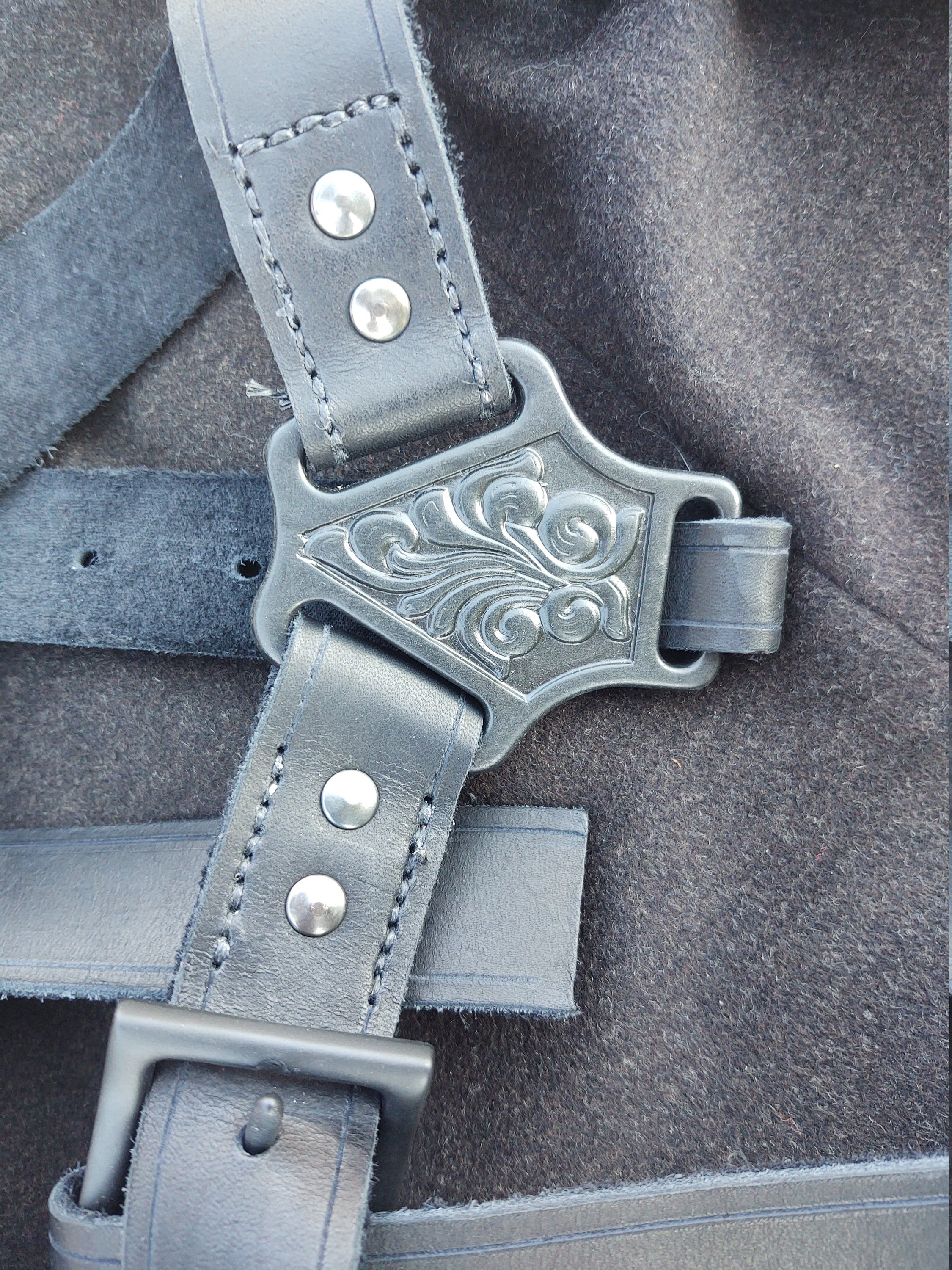 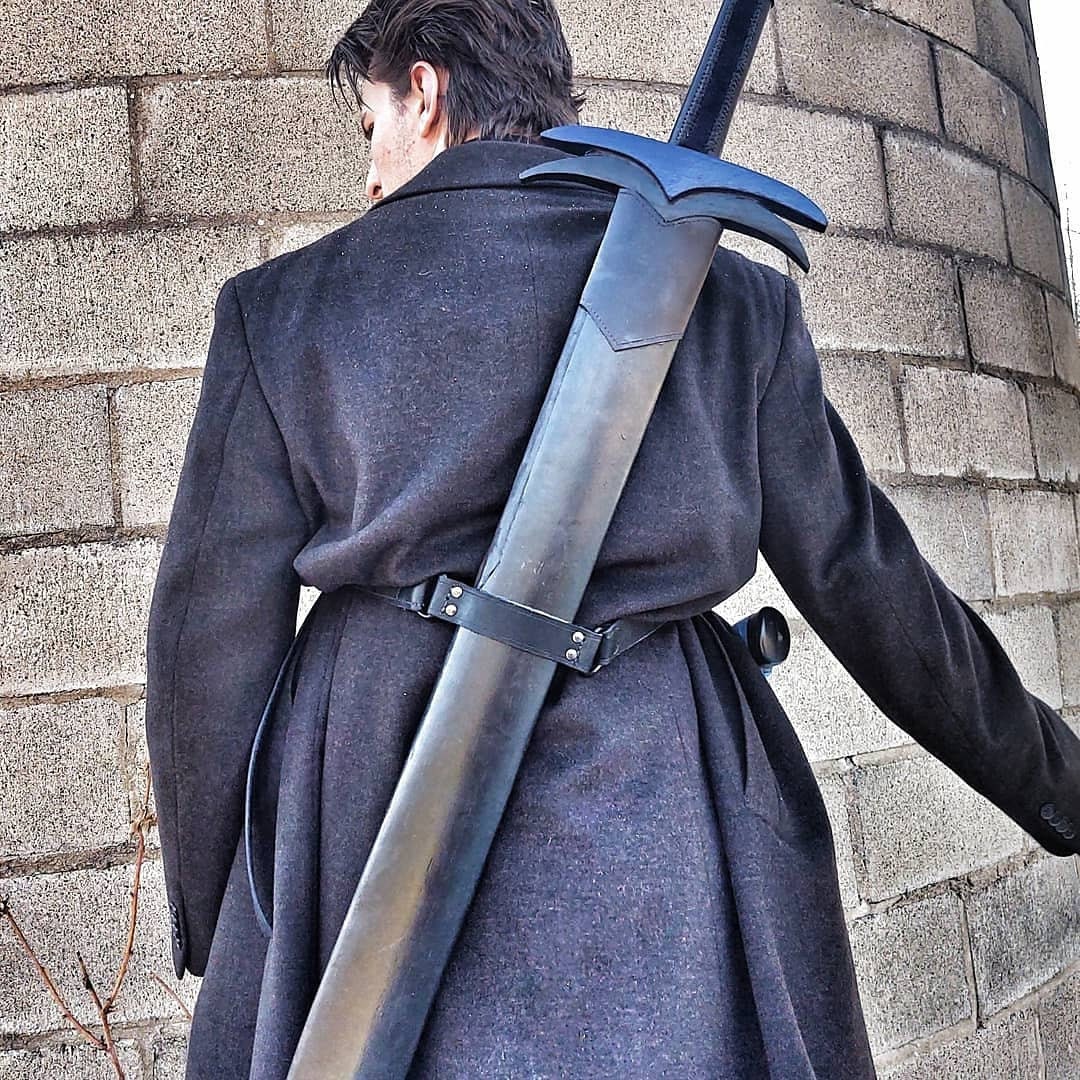 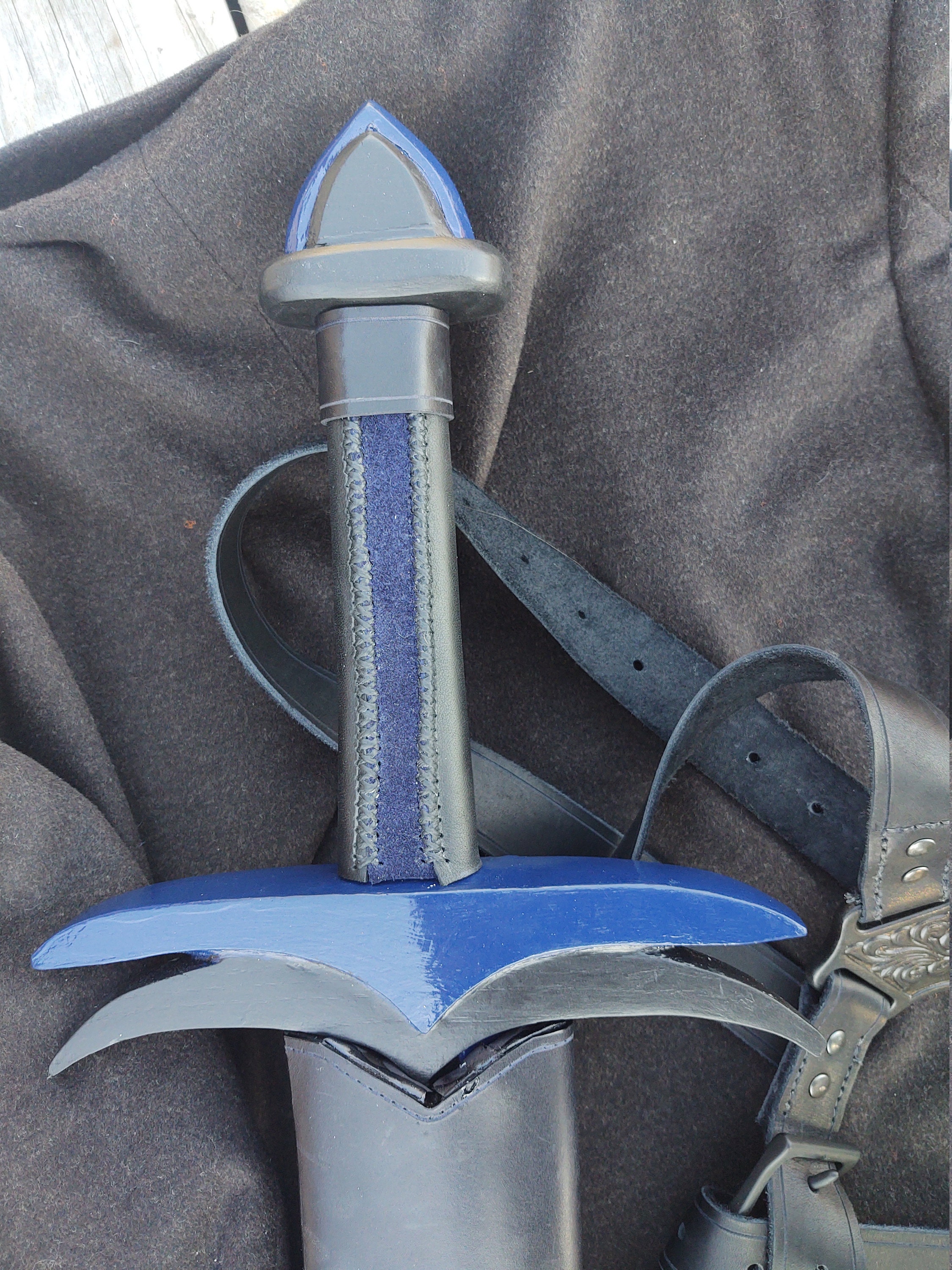 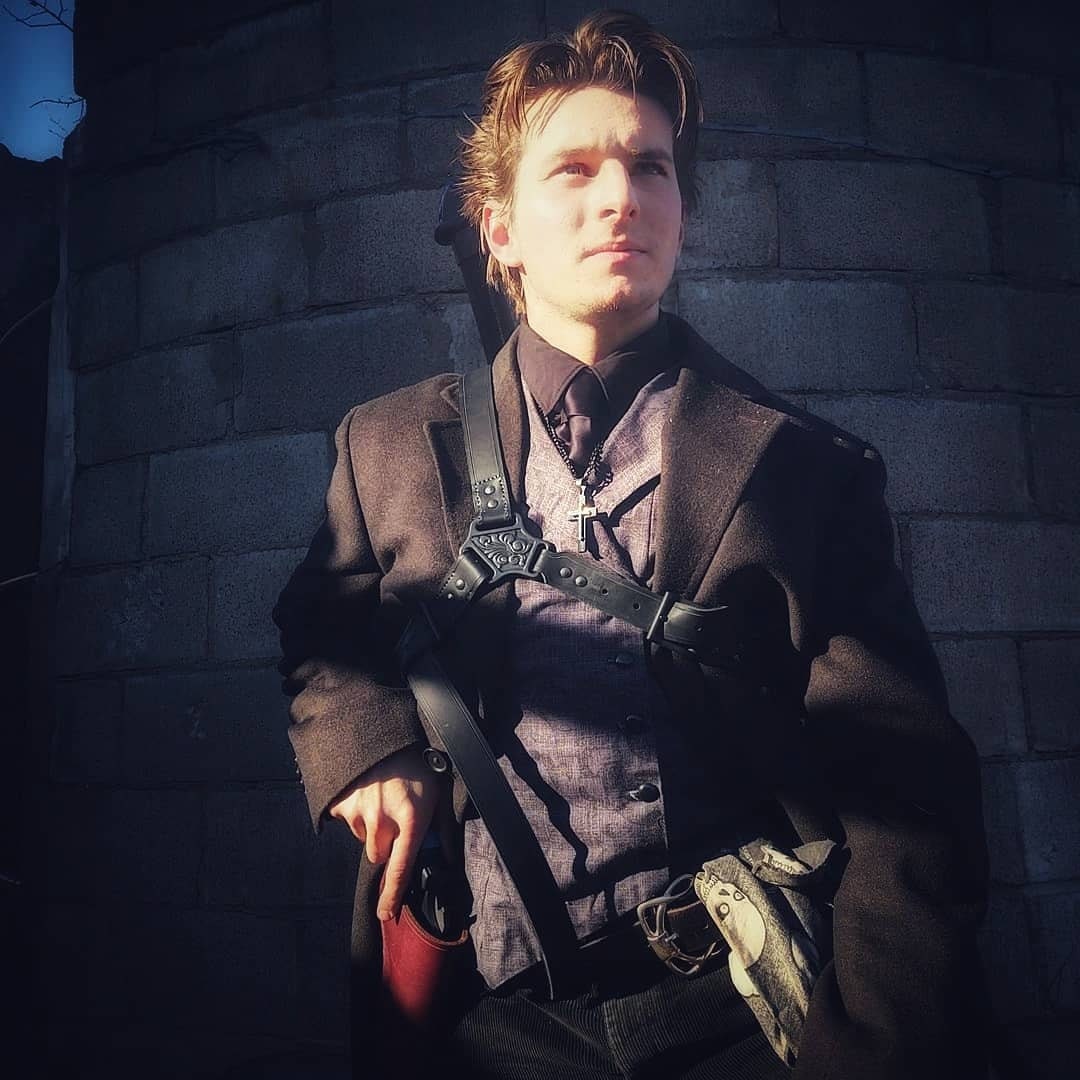 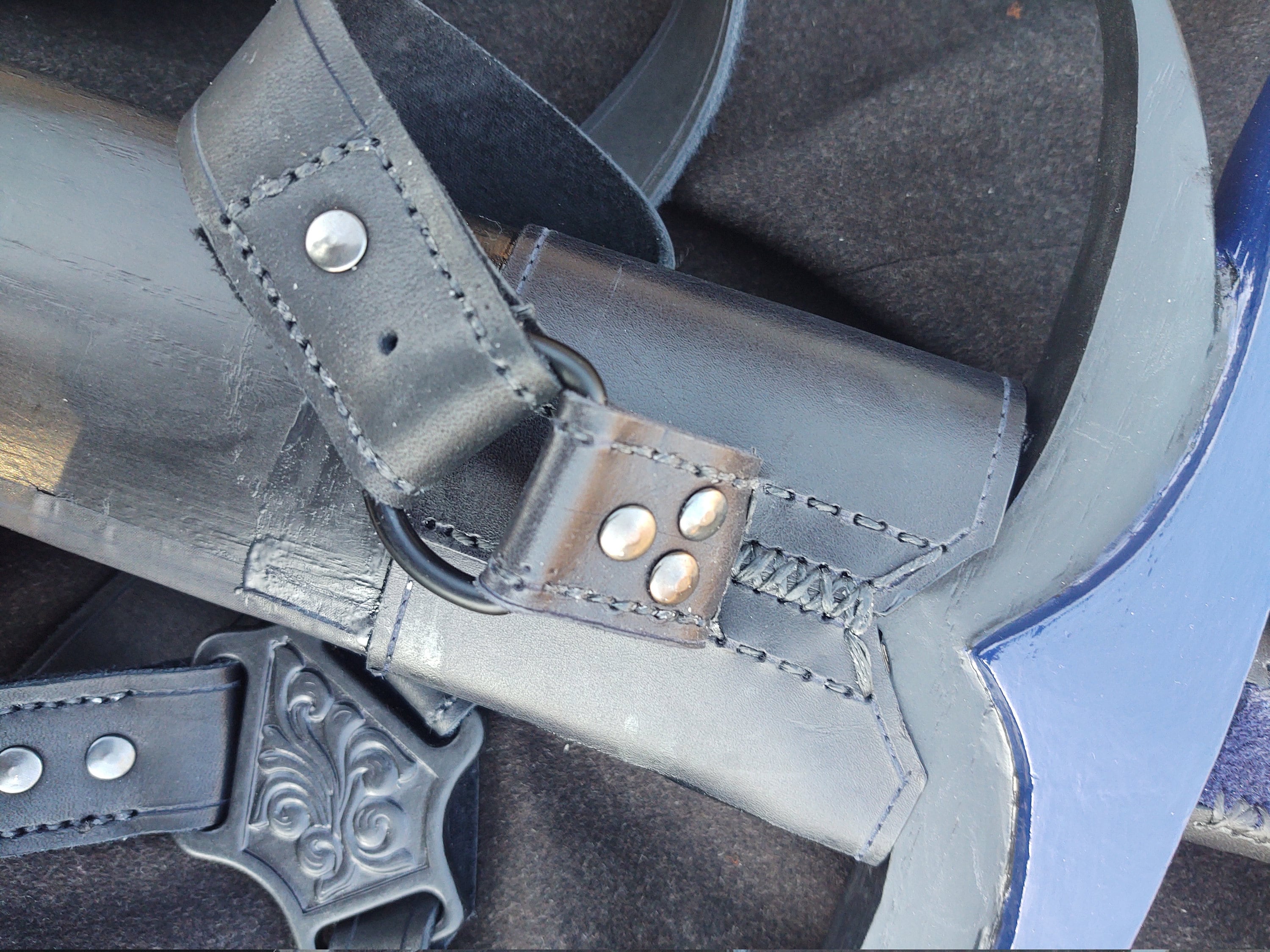 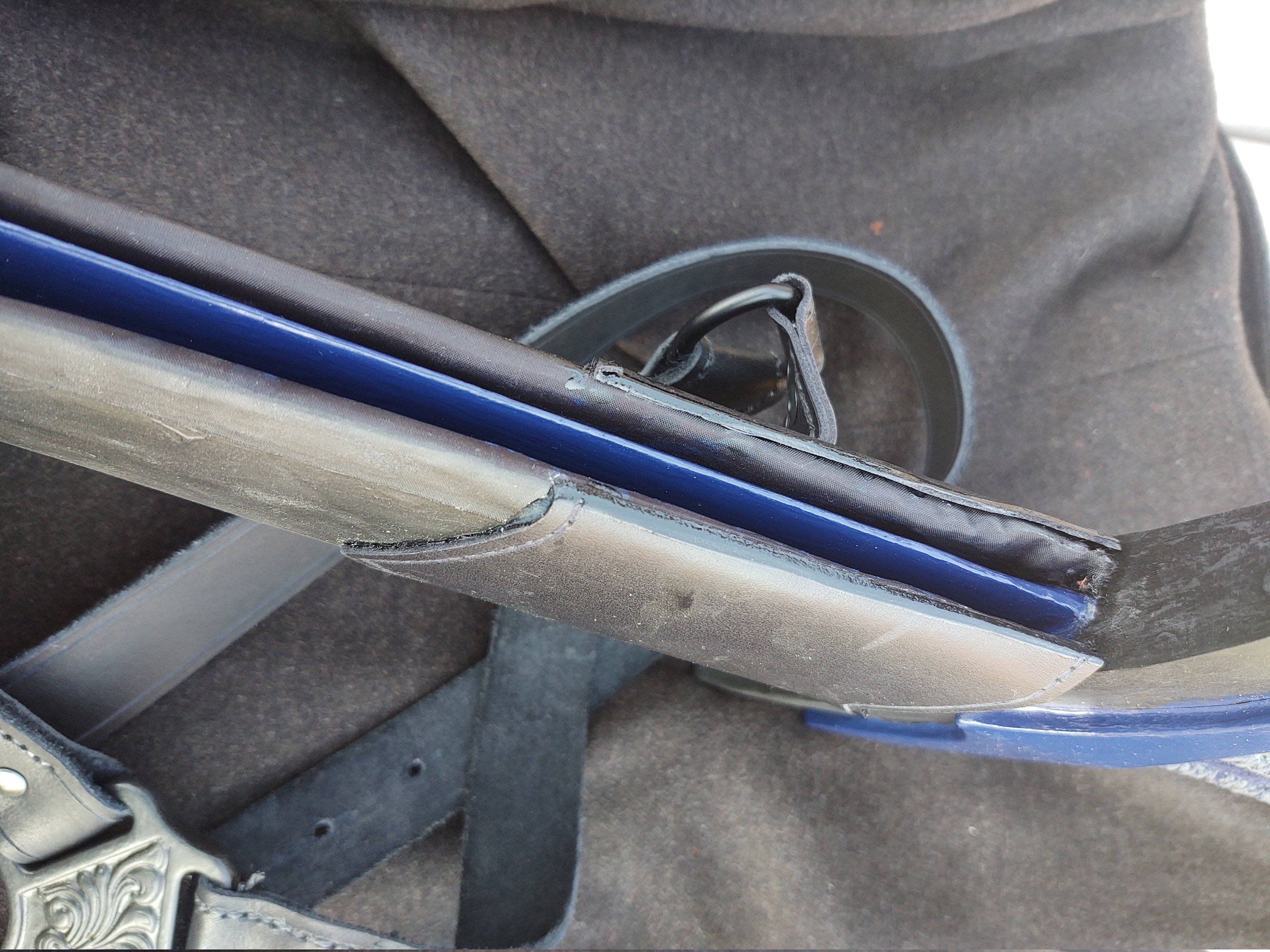 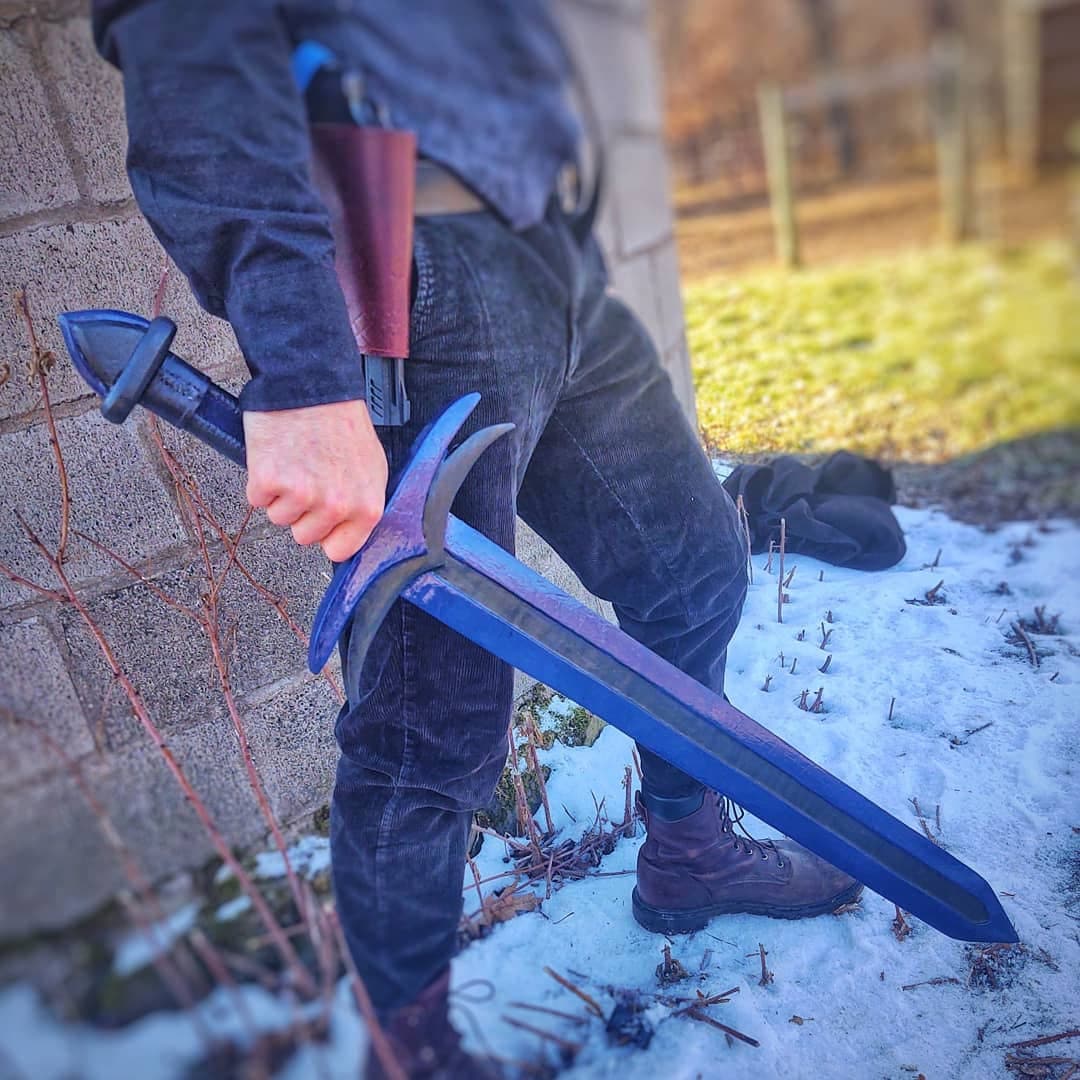 Previous Post 15% off all November Sales! Through Nov. 2020 Check out this short Fireless Forge Video!
Next Post The Elder Wand. The Making Part 1
Cart (0)
0 items in your cart