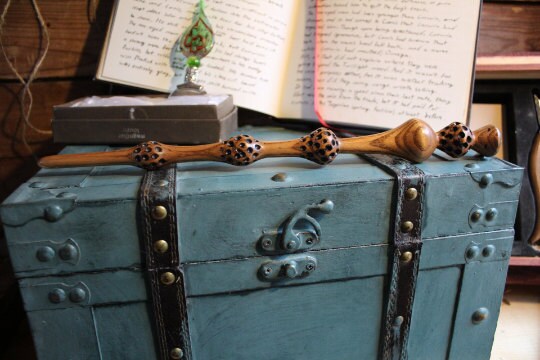 I've made the Elder Wand close to fifteen times now.   It is one of our most popular wands, and as I've said before, I believe it's because of how naturally it fits the movie prop replica. It's actually a very minimalist design, which works on the wood's character more than anything else, allowing it to really speak for itself.     This wand was a custom order, and brought a new look, and a new challenge, to this design. 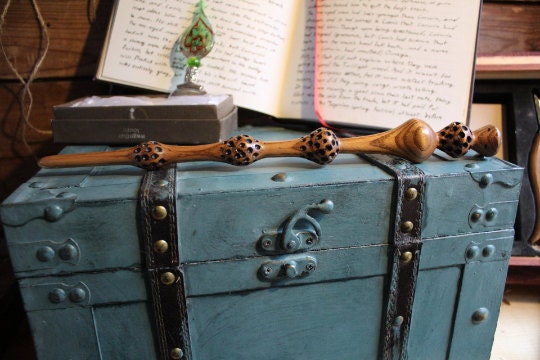 Chestnut and Phoenix feather core, 13 inches.     Carved in the style of the Elder wand, with a few personalized tweaks here and there, the greatest challenge with this wand was not carving it, which at this point, I could do in my sleep. The real challenge was in adding a core to this design. The Elder wand has a very slim shaft, it reminds me of finger bones. With the nobs as metacarpal-flange joints ( finger bones, sorry for the medical jargon, I'm also a PT ) It's delicacy meant that making it hollow, and than carving it, would be a testament to my carving skills. 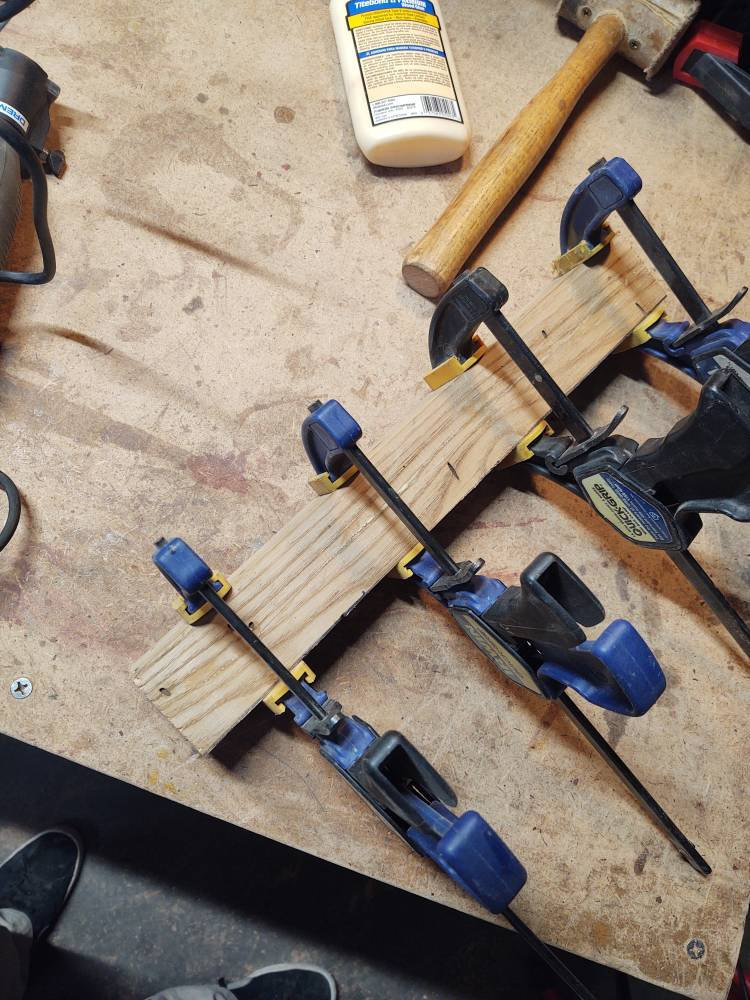 American Chestnut is a rare, and endangered species, nearly extinct. But don't worry, I didn't illegally cut any trees to get the material. The wood used for this wand was from an old salvaged barn board, and honestly, I've no idea how old this wood is. I wouldn't be surprised if it was close to 200 years old! Now that is some intense history to this wand!     I like to think of the different components of a wand as the wand elements.   This elements are the body, the core, and the augments.     The body is almost always wood, which keeps the wand fixed in this world, and embodies and conducts the magics we perform.     The core is like the power source, the battery, which makes the wand more than a stick and lends it power.     And than, there is augmentation.     Augmentation is used to balance, or enhance the wand's properties. Not all woods will pair with all cores, if you are assembling them as raw materials. Every element has it's unique set of properties. If improperly combined, this may result in an unstable, or 'imbalanced' wand as I call it.     This can result in a wand that is more than just sporadic and undependable, but downright dangerous. Liable to backfire, warp, or even explode in the back pocket, and a montage of missing buttocks is not the kind of reputation a Wand Maker wants to garner. 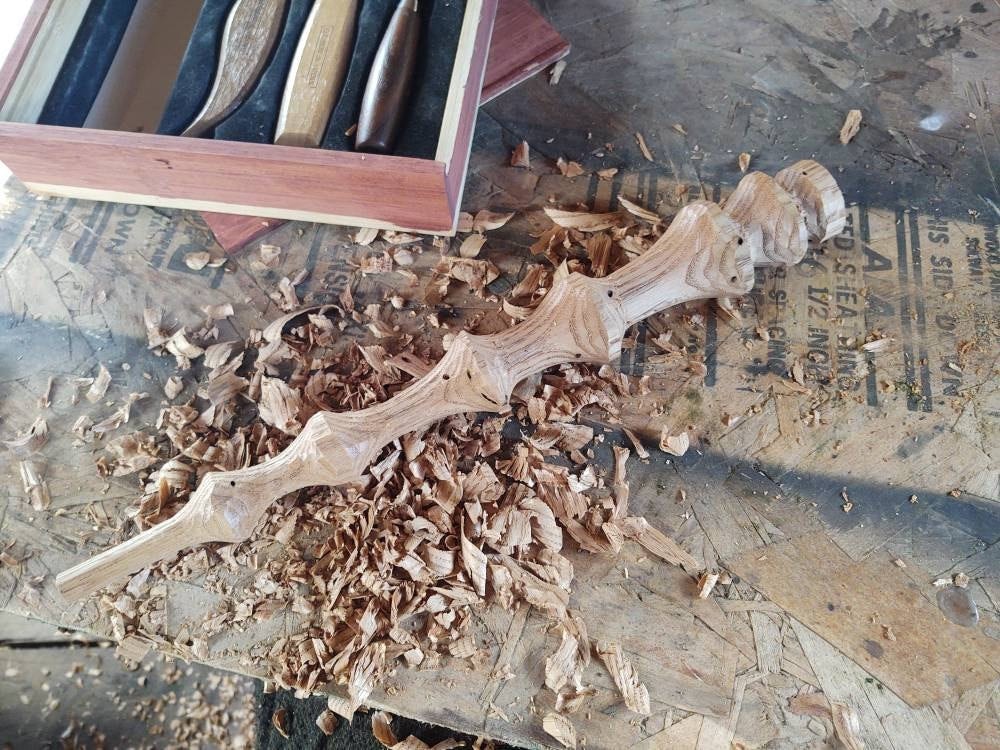 Therefore, all the components of the wand must e considered, and compared with each other carefully.     In this case, I used Blue Kyanite and water vapor to help balance the wand's elements.     I also took into consideration the customer's intended use for the wand, which was alchemy. A basic principle of alchemy is the changing elements within elements.     In my research of ancient Alchemy, I found these article clippings of particular interest.      “ According to Jabir, the Islamic Philosopher and author, in each metal two of these qualities were interior and two were exterior. For example, lead was externally cold and dry, while gold was hot and moist. Thus, Jabir theorized, by rearranging the qualities of one metal, a different metal would result. By this reasoning, the search for the philosopher's stone was introduced to Western alchemy.”     “An important example of alchemy's roots in Greek philosophy, originated by Empedocles and developed by Aristotle, was that all things in the universe were formed from only four elements: earth, air, water, and .fire According to Aristotle, each element had a sphere to which it belonged and to which it would return if left undisturbed. The four elements of the Greek were mostly qualitative aspects of matter, not quantitative, as our modern elements are; "...True alchemy never regarded earth, air, water, and fire as corporeal or chemical substances in the present-day sense of the word. The four elements are simply the primary, and most general, qualities by means of which the amorphous and purely quantitative substance of all bodies first reveals itself in differentiated form." 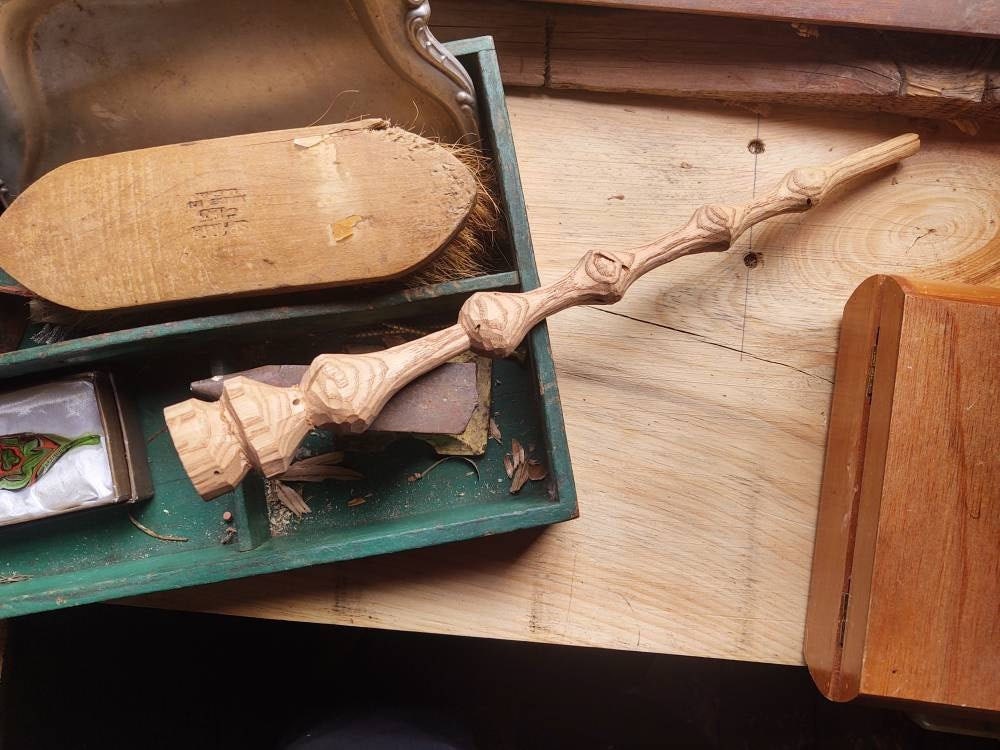 From this research, I gathered a basic principle to apply to this wand. All four elements, earth, air, water, and fire, must be present, and balanced, within the wand's final composition.     Thankfully, I had a very stable wand body to work with. With it's ancient roots, and powerful structure, chestnut really could not have been a better choice for this type of wand.   And it's elemental composition already bore three of the four elements. Water, Fire and Air. And because they exist in intimate connection with the soil, all tree's have a powerful connection to this earth. This connection and stability is why wand makers the world over use wood as the wand body,     But each element had to play a near equal part in the wand's composition, and I knew that each time I added a new element to the wand, it would imbalance all the others. 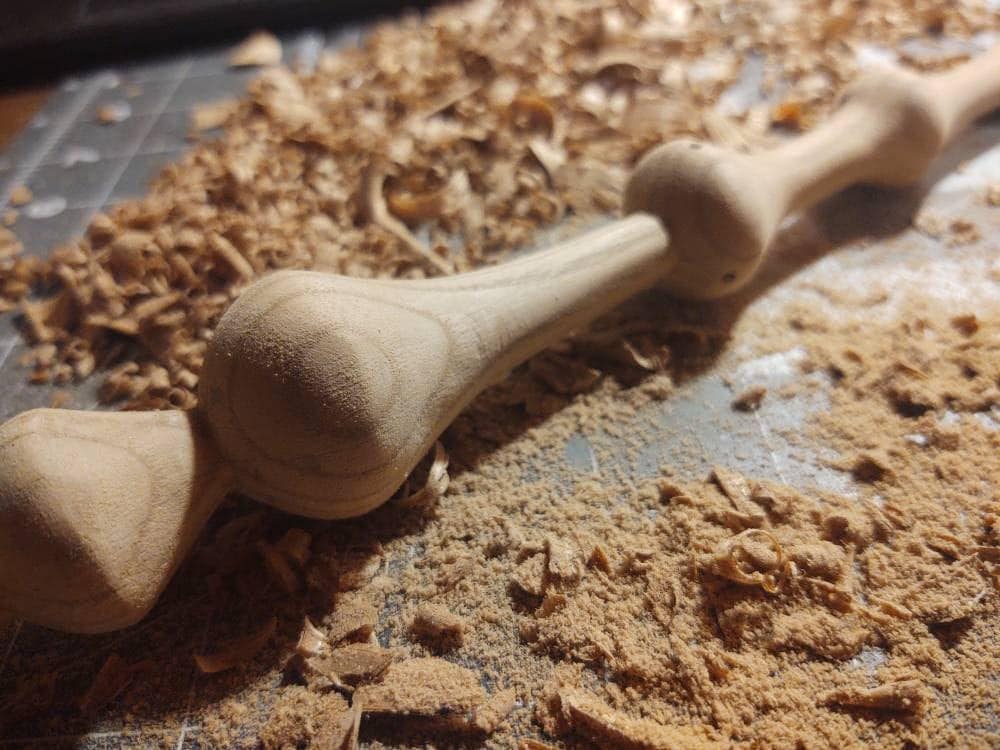 The core, being phoenix tail feather, has a primary element of fire. More controlled and far less erratic than dragon heartstring, which is like the red headed step child of elemental fire components. But still, fire, and it would imbalance the wand if left uncorrected. 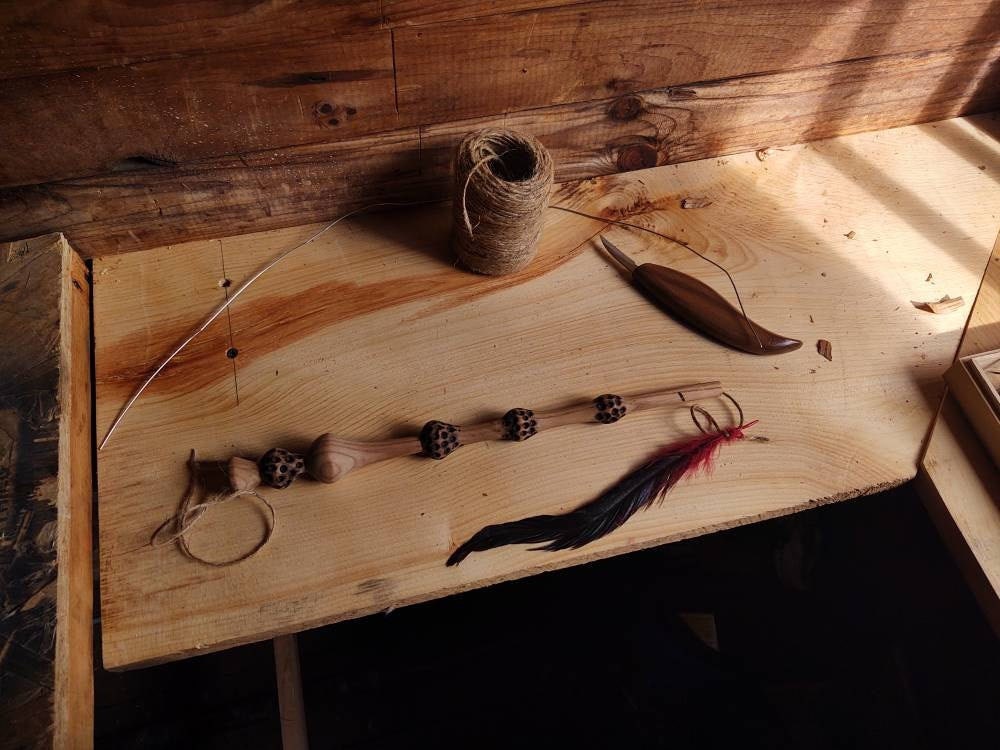 I needed to match, or at least balance out, the other elements, ( that of water and air ), so the wand wouldn't be compromised.     I did this firstly by adding Blue Kyanite to the wand's handle, as a sort of pommel. 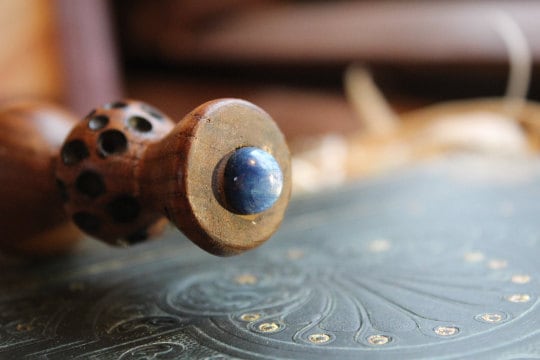 Kyanite has a strong Air elemental connection, which balanced that element of the wand nicely. But the Kyanite also did two other really cool things.     Have you ever tried to light a fire in a vacuum? You probably haven't had the opportunity, but don't waste your time trying, because it won't work.

Fire needs air to live. Like us, it must breath. That's why smithies use bellows to strengthen their fires when they are forging. In the case of this wand, it's power is automatically increased by heightening the air element.   The core is literally feeding off the Kyanite, making it more powerful. Thankfully, chestnut's energy conduction capacity ( ECC ) is more than enough to handle it.    But that is just the first cool part. The other awesome feature comes from the Kayanite's positioning. I usually use wood buttons to seal the core inside.   But this time I capped the wand with the Kyanite ball. Because of it's position in the wand, the Kyanite has direct contact with the core! 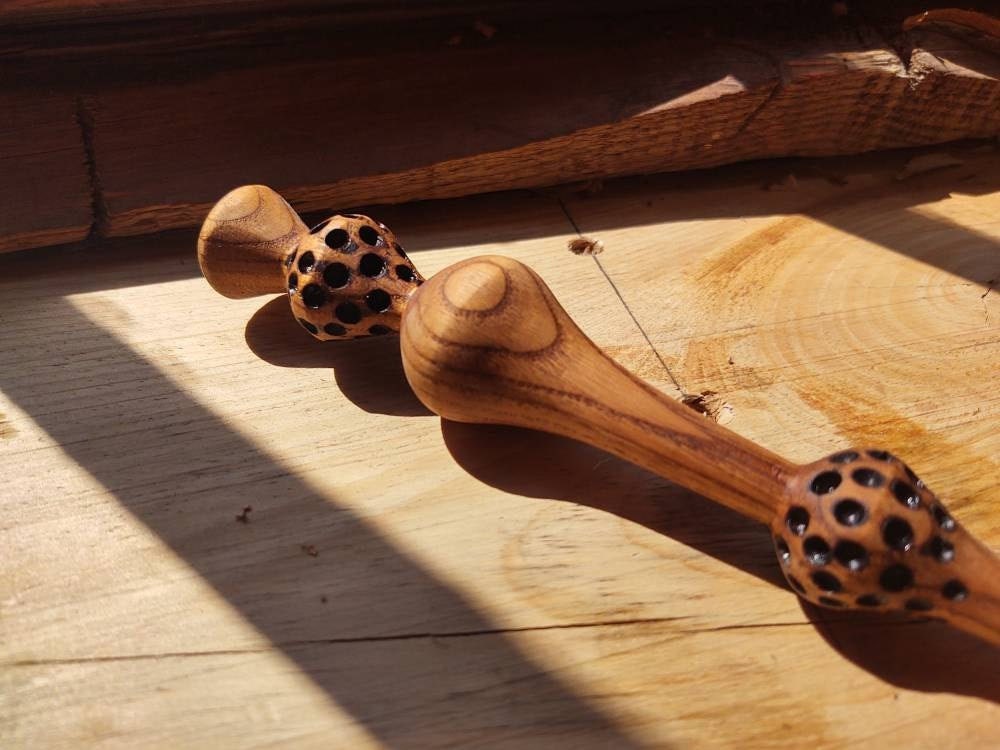 Not only does this feed the core more directly, but it actually creates a direct bridge between master and core. If held properly, with the palm touching the Kyanite, the witch or wizard who uses this wand will have a direct link between themselves and the core. The connection between the wand's core, and the wizard, will be uninterrupted and intimate. Creating an instant and unwavering transfer of intent and energy between the wizard and the wand. 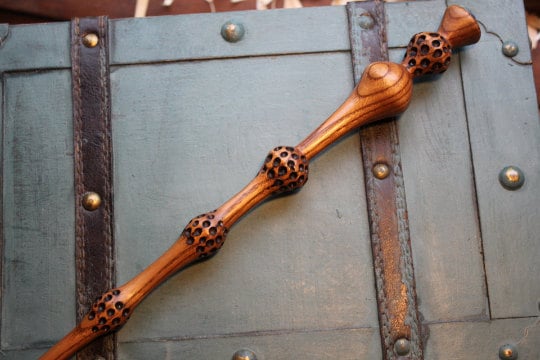 Finally, I passed the wand through water vapor, just to give the water element already present in the wand's body a little boost. I didn't want to make it too strong, because the core ( fire ) and water do not mix well, and could cause delayed reactions and contradiction inside the wand. It needed water to be present, but I didn't want it to impair the core, so I only added a very light augment.

The final result is probably one of the most powerful, and unique wands I have ever made. May it serve it's chosen master well.