The Effects of Black Unicorn Tail Feathers As Wand Cores. by Wan D'makre 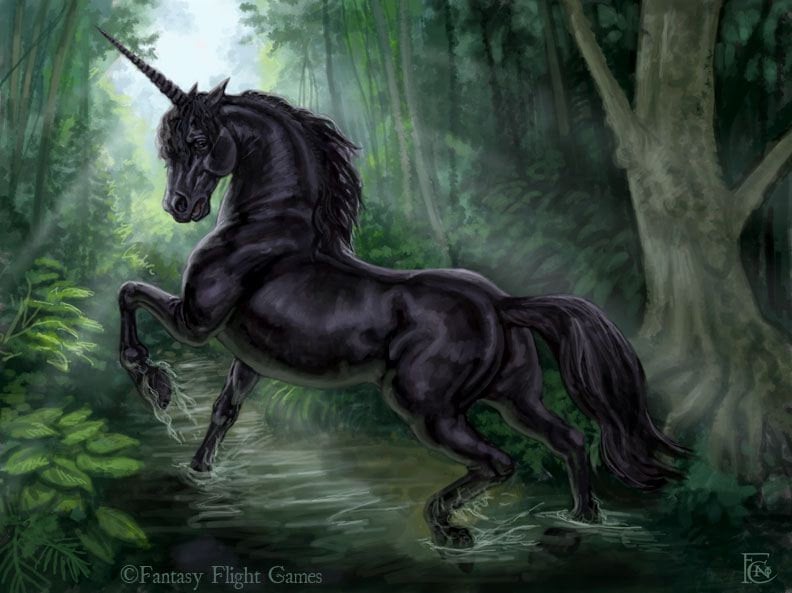 Not only that, black unicorns are rare, and live solitary lives unlike their white counterparts, making them far more difficult to locate.     This is why most wand makers tend to lean towards the white's tail hairs, being much easier to work with, and source.    While it's not widely known, the black unicorn is actually the older of the two. And was first recorded by the Greeks long before the rise of it's younger cousin.

They are often associated with death and misfortune. Many mystics and seer's claim that seeing one in your dreams, or in the moonlit forest, is an ill omen. However, ancient Greek texts indicate that this might be a falsehood propagated after the rise of the white unicorn.

Adding to the mistrust, is the unusual nature of their diet. Black Unicorns are actually carnivorous hunters, and given their powerful, lanky bodies, more reminiscent of the wolf's frame than the equine's, this is not hard to believe. It would also explain their tendency to live solitary lives.

Unlike their white cousins, black unicorns do not live in herds. Each one guards a broad territorial range in which it hunts. This range can span thousands of leagues for each individual creature, which makes tracking them down enormously difficult. However, there is a trick to the process, although it is a costly one. I mentioned earlier that black unicorns are hunters, but they can be convinced to graze when presented with the right nourishment.

For instance, they are particularly partial to raw gold. Acquiring enough gold to keep one occupied for the few seconds it takes to pluck a few tail hairs while they gorge, can be a very expensive, but highly effective, method of collecting black unicorn tail hairs.

But I feel the Black unicorn has been unfairly delt it's bad reputation.

I, for instance, have never found myself in danger while collecting tail hairs. Although there was one close call years ago, and I yet bare the scar in the shape of a hoof hidden among my brown locks.

But even that was not he creature's fault, for I had startled it, and it's reaction was what you would expect of any corner beast. More often than not, I have found Black Unicorns to be powerful guides and allies.

The White has always been considered a guide to humankind, but few realize that the black is too. Although their guidance is firmer, and more aggressive, an assertive push forward, rather than the gentle coaxing of the white.

Black unicorn wands are best matched with assertive, and powerful, characters. While they may be difficult to pair, and can sit on the back shelf collecting dust for hundreds of years, once it has chosen it's master, the wand will be unwavering in it's loyalty and power.

Some wands may shift their allegiance under the right circumstances, but a black unicorn wand will never waver. Even if it is wrestled from your grasp, the magic it performers under the thief's direction will be sporadic, and tends to backfire on the usurper.

For this reason, black unicorn wands are particular favorites of Aurors, and duelers. The wand still retains the fighting spirit of it's forbear.

To help focus and stabilize the power of a black unicorn wand, the maker should always try to incorporate gold into the wands elements during the augmentation stage. This will make it more manageable, and more likely to pair and free up shelf space. I do not recommend having more than one or two blakc unicorn wands in stock at one time, as their selling rate it quite slow due to how increadibly picky they are.

- Researched and written by Wan D'makre.